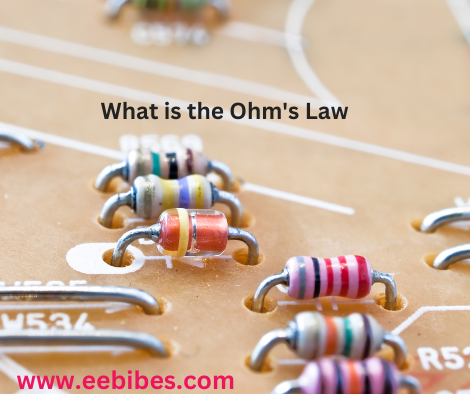 What is the Resistance?

How to Connect Resistances in Series and Parallel?  The measure of opposition to electric current in an electric circuit is known as electrical resistance. In common words it can be described as the force which a resistor uses to stop the flow of current flowing across it. In some cases, it is also defined as the ratio between the potential difference or voltage applied across the resistor to the current flowing through it. Another term which is the exact opposite of resistance is known as electrical conductance. It is the perfect reciprocal of resistance. The formulas for both the quantities as given as

This nature of materials affecting the overall resistance of a substance if qualified by resistivity or conductivity. These two are also important terms which are used if one is dealing with materials with strange resistive or conductive behavior. However, the nature of material is not the only quantity affecting the resistance, it is also affected by the size and shape of the object because these qualities are rather extensive. For example, a long and thin wire offers high resistance and low conductance while a short and thick wire offers low resistance and high conductivity.

Power Dissipation of a Resistor

Resistance is the property of a body that transform electrical energy in heat energy. This phenomenon can be easily understood. As resistor offers opposition to the flowing current, as a result of this opposition, resistor gets heated because of the heat generated inside the resistor. Thus we can easily conclude that resistor is a source for converting electrical energy into heat energy. Resistance involves collision of current-carrying charged particles with fixed particles situated inside conductor. Resistance is sometime regarded as localized in some devices such as lamps, heaters and resistors. Although it is the characteristic part of almost every circuit, if there is not voltage drop across a resistor in a circuit, the current will not dare to flow.

The resistance of a conductor, or any circuit element, generally increases with increasing temperature. Upon cooling, some circuit elements show a non-responsive behavior and show zero resistance.

What is the Ohm’s Law?

One of the most important concept in the field of electrical engineering and electronics. For many materials, the CURRENT I flowing through the material is directly proportional to the APPLIED VOLTAGE V across it over a wide range of voltage and current. Mathematically

Thus according to the formula, a direct form of relation can be seen between the voltage applied and current flowing. The resistance or conductance of electronic components inside a circuit remains constant. This relationship is called OHM’S LAW and the materials that obey ohm’s law are called ohmic materials. Similarly, those materials that do not obey ohm’s law are called non-ohmic materials.

The graph of an ohmic material consists of a straight line that goes straight towards a positive slope. While the non-ohmic materials, as they do not obey ohm’s law, don’t form a similar graph rather they constitute a quite invariable and unpredicted graph.

What is the Resistivity and Conductivity?

The resistance of a given object depends primarily on two factors: type of material and the physical properties. The resistance is inversely proportional to the cross-sectional area. Thus for a thick wire the resistance would be minimum. Also the resistance has a direct relation with the length of the material used. A longer wire offers more resistance than a shorter wire. Now formulating these statement for formula generation for both resistivity and conductivity

How to Measure the Resistance?

What is the Static Resistance?

It is also referred to as chordal of DC resistance. Simply it is the basic type of resistance we have been studying up till now. This points to the basic definition and concepts of normal resistance i.e. voltage divided by current

Static resistance determines the power dissipation in an electrical circuit when it is connected to a DC source. Its graph curve is same as that of a normal resistance.

What is the Dynamic Resistance?

Also called as differential or incremental or small-signal resistance. Dynamic resistance is defined as the derivative of voltage with respect to the current: the slope of the current-voltage curve at any point in the graph

Series and Parallel Combination of Resistors

The combination rules for any number of resistors in series or parallel can be derived with the help of OHM’S law, the voltage law and the current law.

In series combination, the current in the circuit remains constant thus the total equivalent current will be equal to

What are Different Types of an Inductor?