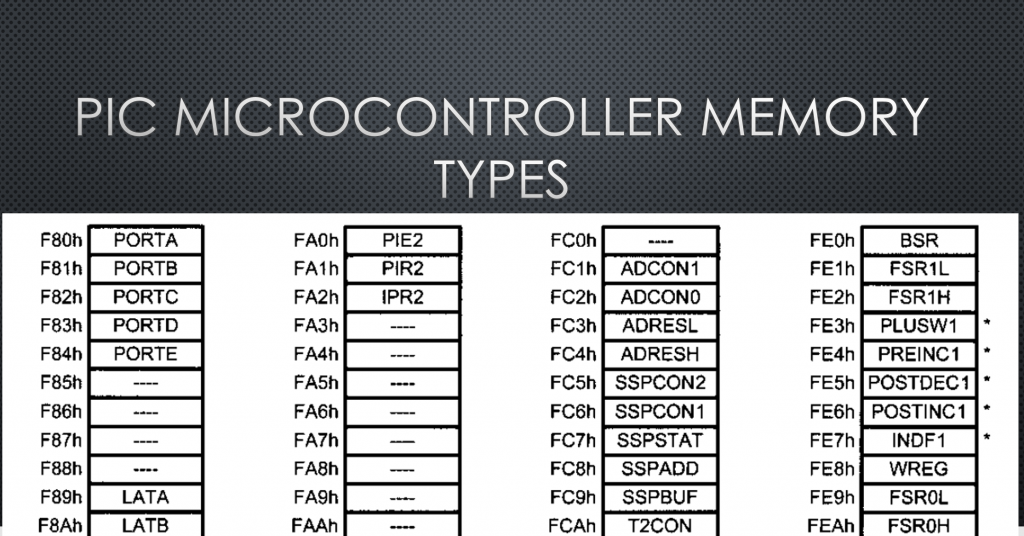 PIC microcontrollers families include 10xxx,12xxx,14xxx,16xxx,17xxxx and 18xxxx. One problem that exists in these families are they are not upward compatible. For example PIC12/PIC16 have 12 and 14 bits wide instructions while PIC18 has 16 bit wide instructions. So if you have written program for PIC12 or PIC14 you can not directly use it for PIC18 until you make little changes in it.

As discussed above, controllers with UV-EPROM were taking much time for erasing their contents so microchip introduced the new versions with flash memory. These microcontrollers have letter F in their number. For example PIC18F4550. These microcontrollers are good for product development perspective as erase operation can be performed in seconds. This feature eliminated the extra time that PIC with UV-EPROM was taking and hence increased the speed of product development. Here a burner is needed for using PIC for product development. There is no need of extra eraser to delete the contents as flash memory is EEPROM

which is erased electrically. It is necessary to erase all contents of ROM if you want to program it again. The erasing operation is performed by ROM programmer itself. These microcontrollers can be programmed by PICkit that can be connected via USB to your computer.

OTP mean one time programmable microcontroller. Such types of microcontrollers are used for launching your finalized product. Obviously as their name indicate that they can not be reprogrammed again so they are cheap. Their package number has letter C indicating OTP ROM for example PIC16C432 etc.

This types is used for product development. Once you have finalized the product then for mass production the price per unit is quite low.

This is the last version of PIC with masked memory. You can provide your program to microchip and they will burn it while designing your chip during the fabrication process. Such microcontrollers are named as masked PIC based on one of the steps of fabrication process known as masking. They are the cheapest among all other types.

what is the program data memory of PIC microcontroller?

The program data memory of PIC microcontroller is actually used for strong data or scratch pads. It can vary in size in different families. Generally the size of program data memory is from 32 bytes to 4096 bytes. This memory has been divided into 16 banks each of which is of 256 bytes. Hence there are total 16 banks named as bank0 to bank15. Bank 0 is common in all microcontrollers. This bank is also known as access bank. Generally program data memory is divided into two categories: General Purpose Registers (GPRs) and Special Function Registers (SFRs). SFRs are found in almost all controllers and their size is fixed (128 bytes). Rest of the memory (4096-128) is used for GPRs.

Since there are maximum of 4096 bytes available so starting from 0 we will have 0 to 4095 byte sized slot available. If you convert 4095 into HEX it is equal to FFFh. Thats why the last slot has address of FFFh. Similarly, 3968 bytes are available for GPRs so from 0 to 3967 (F7Fh) is mentioned for GPRs and SFRs start from F80 which is 3968 in decimals.

Here I will discuss some of the most widely used instructions that are:

ADDLW 5h: This instruction adds the literal value 5h into the WREG register.

MOVWF FileReg: This instruction copies the contents of WREG register into file register. This file register can be a memory location or any SFRs (PORTs of PIC).

DEC fileReg: This instruction subtracts 1 from the contents of file register.

MOVF: This instruction copies the contents of file register into the WREG register. This command is usually used for taking input from the external environment.

MOVFF PORTA,PORTB: This instruction will copy the contents f PORTA into PORTB.

What are the flag registers of PIC?