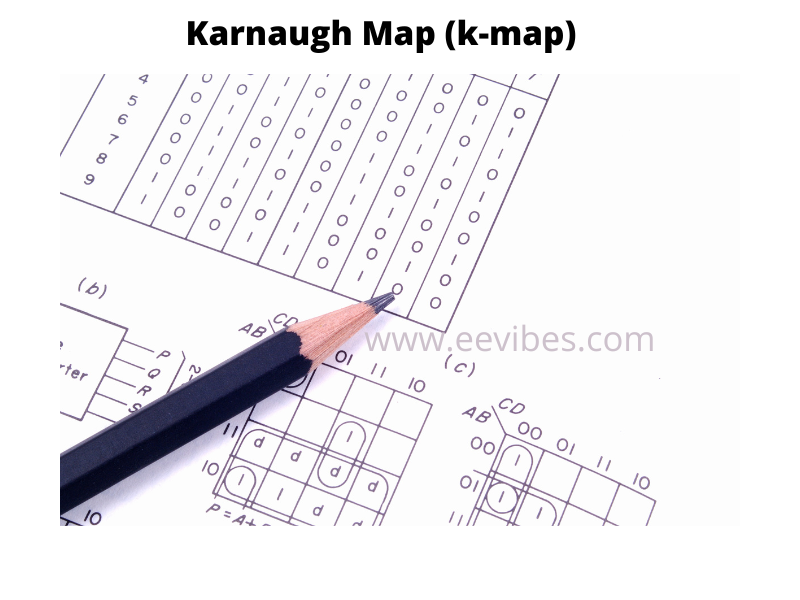 How to Simplify a Boolean Function Using Karnaugh Map (k-map)?

In this method, the minterms are represented in a block of box. The size of the box is determined from the number of literals of a functions. If there are n literals, then there will be 2n possible blocks in a box.  K-map method can be used from 2,3,4,5,….n variables. But because of the complexity of higher terms, we will just focus on upto four variables k-map. The k-map representation of a function is not unique. There can be different forms of a simplified function but each will contain equal number of literals.

The 2 variable k-map consists of four block where each block represents the minterm of a function. 2-variable k-map is shown below

The simplified function expression is

since 0 is marked as primed variable. y=0 in selected column so mention it as y’. x changes its value from 0 to 1. so (x+x’)y’=y’ given that x+x’=1. Both results can be compared and it can be concluded that original function needs four literals, while simplified version needs only one literal.

In this example function is equal to

It should be noted that if all minterms of the function are equal to 1 then this represents an identity/constant function or F=1.

The three variable k-map will consist of 8 blocks. The minterms are mentioned in such a way that each adjacent block changes only one bit at a time as shown below.

so if you notice m1 and m3 only change their 2nd bit (y 0—-> 1). This property causes the redundancy of Boolean expressions.

This function is simplified as

This function is simplified as

Lets say we are given the following minterms of a function

Now lets just simplify it using k-map. Place 1 in all boxes corresponding to the given minterms.

How to Determine the Prime and Essential Prime Implicants of the Given Function?

The four possible combinations of adjacent squares with their functions are shown below. It can be seen that BD and B’D’ are common in all four expressions:

Software to simplify the Boolean expression

what is the Canonical form representation of Boolean function?