How Maxwell’s equations are defined for electrostatics and magnetostatics? This article aims to get better understanding of static properties of magnetic and electric field to get better understanding of faraday’s law of Electromagnetic induction and how it will have related to the curl of electrical field. To get better understanding, the use of Maxwell equations. The equations which describes the relationship between as change in magnetic field and change in electric field are called the Maxwell’s equations. Maxwell equations are extension of the famous works of Gauss for the electric and magnetic field, faradays and lastly Ampere. Maxwell equations can be written in integral form and as differential form. The differential form of these equations relates the characteristic of vector fields at any given point to the other point and to source densities at given point. Integral form of these equations controls the dependence of a particular field and the amount of source (charge and current) corresponding to the regions in space, large sections and volumes. Mainly these four Maxwell equations provide the strong mathematical background for study of electromagnetic waves which further used in transmission line and antenna’s.

In 19th century, the physicist James Clerk Maxwell explain the electromagnetic phenomenon by using four set of equations. These four equations together with the Lorentz force law explain the major law of magnetism and electricity.

According to paper, equations expressed:

The basis of “action-at-a “electromagnetism, development-opened by André-Marie Ampère, Franz Neumann, Augustin Coulomb, Wilhelm Weber, Gustave Kirchhoff, his successor physical, local communication in between the amount of field; setting a case value field inscape and time, and moment the charge corresponds to the field its specific location

Almost two decades after publication of Maxwell, Rudolf hertz and Oliver Heaviside consolidated Maxwell mathematical equation into four current equations that was written in the form of magnetic and electric field.

The revolutionary nature of these equations was recognized by Einstein who wrote: The mathematical form of these equations and formulation is the most important event in physics since newton’s time, because they form a sort of pattern for new type of law. Richard Feynman a physicist said:” From a long view of history of mankind, there can be a little doubt on that most significant event of 19th century will be judged as discovery of Maxwell laws of electrodynamics”

What are the Maxwell’s  Equations?

Maxwell four equations explain the magnetic and electric field arising from distributions of current and electric charges and how these fields will change in time.

CONTRIBUTION OF MAXWELL IN ELECTROMAGNETICS:

USE OF MAXWELL EQUATION:

It is independent of coordinates and it is an approach to multivariable calculus.

“The total flux of the closed surface is equal to the total charge enclosed by the surface.”

Where D is electric displacement field, ρ is free charge density. It is state that the electric flux through a closed surface area is equal to total charge enclosed in that surface

Consider the sphere of some length L and radius r centered on the charges. A long line of stationary charge placed as shown in figure

There are the symmetrical, not symmetric and symmetric spherical surfaces as shown in figure:

Suppose, we have to find the field at point P. Draw a concentric spherical surface through P. All the points on this surface are equivalent and by symmetry, the field at all these points will be equal in magnitude and radial in direction.

From Gauss law, this flux is equal to the charge q contained inside the surface divided by ε0. Thus,

b)Let us consider the figure (ii).

The presence of magnetic field (i.e., monopoles) which can act as sources and sink magnetic field founded by British physicist Paul Dirac (1902-1984) 1931 to describe the electric charges, acquired by American Nobel philosopher to Robert Millikan (1868–1953). monopoles feature prominently in modern gauge-symmetric theories, but they have not been yet observed in our universe.

In figure we consider a closed pass in magnetic flux line, you can clearly scene that number of line passing is equal to number of line leaving the surface.

Essentially it is stating the impossibility of creating a magnetic monopole; the total magnetic flux through a closed surface is zero.

Divergence of magnetic field lines of unit area should be zero.

Gauss’s law of magnetism also allows you to track field lines. Think of Gaussian surface, such as the “half donut” or “half bagel”, which follows the lines of the “up and up and up” field from the

magnetic spine (like the earth’s axis) to the equator, and then “cut backwards inwards” until they meet and its original field storage:

As we know: ∫B.dA=0, in this case the surface integral is zero along the field lines. But positive along the outside of sphere at bottom. Negative the rest of the way “in” inside the sphere

Thus, we know that a field line “downwards” through the equatorial plane at radius R originated from

Why the magnetic flux through a closed surface be equals to zero ?

Faradays discovered his equation of electromagnetic induction in 1831. But unable to mathematically describe the process. He used the geometric concept of magnetic line of force by Rene Descartes and tells the existence of electronic state.

It is stated that, the time varying or changing magnetic field will always produce an electric field

Maxwell third equation is advanced form of faraday law of induction, it is state that when a conducting wire with n number of turns is placed in time varying magnetic field, an emf is induced in that conducting wire. This is given by lenze law that induced emf will always oppose the cause which produces it.

This is differential form of third equation of Maxwell. On the left side of equation, it is curl of electric field, it will tell about the tendency of electric field of lines to circulate about a point. So the right side of the equation, show about rate of change of magnetic field. 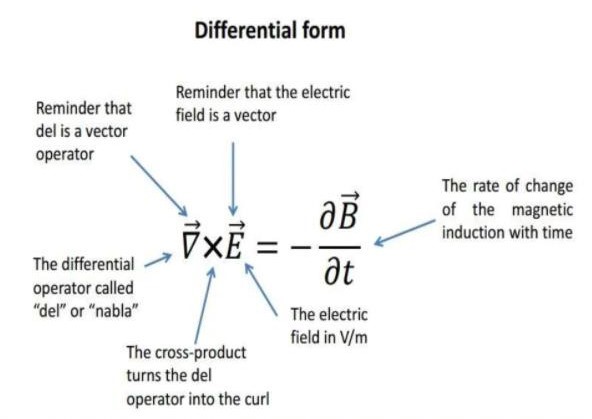 Equation says, if flux through any surface changing will produce an electric field around that surface. If any conducting material present at boundary of surface then emf will induced in it that further produce a current in that surface.

“Change in magnetic field through a surface will produce a induced emf around that surface.”

Following are some applications:

A loop of area 200c is positioned perpendicular to a uniform magnetic field. Without changing in direction of the magnetic field, its magnitude is reduced by 0.08T in the time interval 0.02s. Find the average induced emf in the loop?

According to Faraday’s law of induction equation, a changing magnetic flux through a closed surface bounded by a wire, creates an emf with a magnitude of

B⋅A where   is a unit vector (a vector whose its magnitude is unity) normal (perpendicular) to that surface.