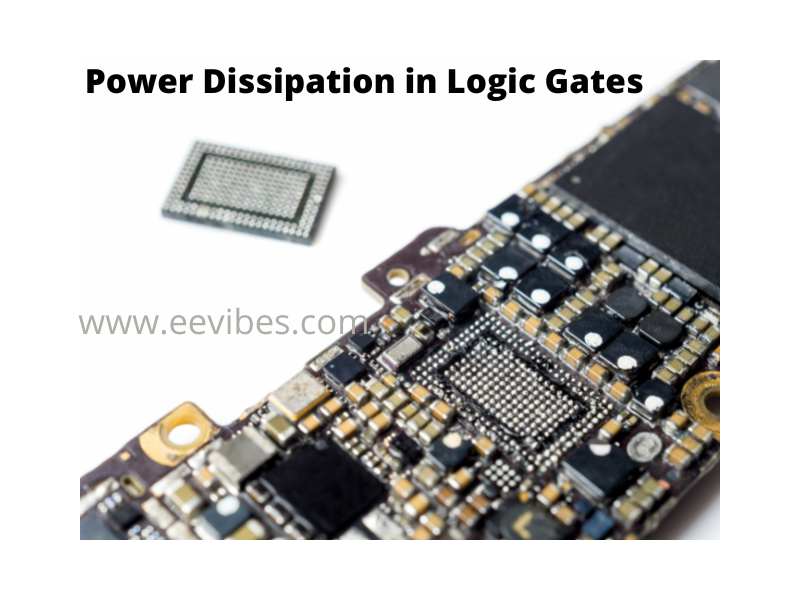 How the Power is Dissipated in Logic Gates? The amount of electric power dissipated by the transistors in an electric circuits is important to be considered. This is because of the fact that million of transistors are fabricated on a single chip. That is why power consumed by a single transistor on a chip is important and must be small. In all logical circuit applications, power dissipation is an important consideration. It becomes crucial when we talk about battery operated circuits or devices for example portable laptops and tablets.

Consider the following NMOS NOT gate. When input voltage Vx=0, then no current flows through the circuit and hence no power is consumed.

Now if we assume that a chip contains 10,000 inverters then the power consumed in total is 10W. Because of this high power consumption, NMOS based inverters are used in only special purpose applications.

In order to differentiate between the power consumed by when the signals are changing and power consumed during steady state, it is necessary to define there are two types of powers:

What are the CMOS Logic Gates?

Let us consider another case as depicted in the following figure. When Vx=0V for some time then Vf=5V. Now if you make Vx=0V, NMOS transistor turns ON and it will result to pull Vf=0V (GND). Because of the presence of Parasitic Capacitance at the node f, Vf does not switch its state instantaneously. Drain current flows for a short period of time through the NMOS transistor while capacitor discharges. The same situation happens when Vx changes from 5V to 0V as shown in part b of the following figure. In this case capacitor has initially 0V across it and then it charges to 5v through PMOS transistor. Current takes path from power supply to PMOS transistor  to charge the capacitor.

The voltage transfer characteristic for the CMOS inverter is shown in the figure below. These characteristics show that there is a range of input voltage Vx for which both transistors are turned ON. Current will flow from VDD to GND within this voltage range VT < Vx < (VDD − VT ) through both transistors. This current is usually referred to as short circuit current of the gate and it is quite negligible as compared to the current that actually (dis)charges the capacitor.

Practically, total dynamic power used by CMOS inverter is small as compared to the power consumed by any other technologies like NMOS technology. This is the main reason all larger integrated circuits prefer to use CMOS technology.

Discuss the MOSFET fabrication and Behavior in detail