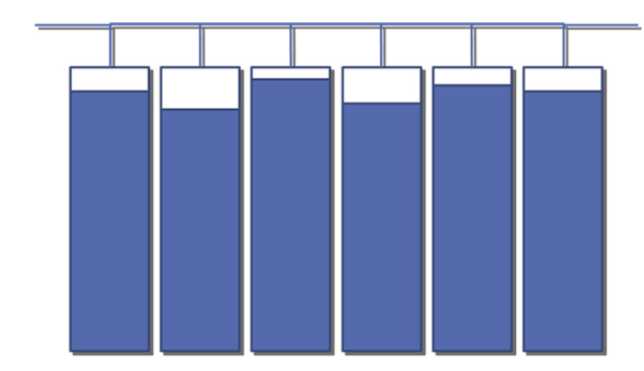 In this article you will get the idea of different types of electrical batteries and their usages in daily life. Two main types of batteries are:

The other name of primary batteries is primary cells. Current can be produced through these batteries ight after their assembling. These batteries are not used continuously, mostly preferable where low current consumption is required by the portable devices. Communication circuits, where the regular power supply is far use these types of batteries. Non-reversible chemical reactions and non reversal of active materials to their original forms result these batteries not to be recharged. They we should strictly avoid to recharge these batteries otherwise it may result in explosion.

These batteries are also called rechargeable batteries. We need to charge them before using for the first time. Active materials are present in them in their discharge state. When electric current is provided to them they are charged and this electric current will result the chemical reaction that had discharged them. Devices that are used for providing the electric current and voltages are called chargers. Lead-acid battery is the type of secondary battery and mostly used in boating and automotive systems.

They are relatively bulky as compared to the electricity they store. They have affordable manufacturing cost and because of their ability to handle large amount of surge currents (450A) they find their applications where their capacity dominates over their sizes and handling issues. They are used in modern EV where maximum current is almost 450A.

Zn-Air batteries are powered up by oxidizing zing with the oxygen in air. Their Production cost is low and they are capable of producing high energy density. They are available in different sizes. Starting from the size of a button (used in hearing aids) to larger sized (used for powering cameras in cinema).

They are actually the hybrid versions of fuel-cells and the batteries where zinc is the fuel. They are receiving great amount of interest these days. They are cot effective with low toxicity and high capacity.

Lead-Acid battery is one of the most popular secondary batteries. They find their applications in automation. They have low cost, high voltage and good capacity. Their disadvantages are:

They can be charged with the single charger under the controlled time conditions. The rated capacity is given at the C20 rate that is the capacity obtained when a fully charged battery is discharged to bring it to an end voltage of 1.75V/cell in 20h.

These batteries are mechanically rugged and long-lived batteries. They also have very good low temperature characteristics. But their cost is higher than the Lead-Acid battery or Ni-Zinc battery.

The choice between Nickel-Cadmium battery or Lead-Acid battery is totally dependent on the type of application for which you want to use them.

Typically, a nickel-cadmium battery would have a voltage of about 1.2 V per cell. To get the needed voltage, a number of cells are linked either in series or parallel. In addition to the voltage, it has a specific energy of 50–60 Wh per kg. This is comparatively less than nickel-zinc and nickel-metal hydride batteries, although it is slightly higher than nickel-iron batteries.

An advanced battery technology known as a lithium-ion (Li-ion) battery makes use of lithium ions as a crucial part of its electrochemistry. Lithium atoms in the anode are ionized and separated from their electrons during a discharge cycle.

Li-ion batteries are able to have a very high voltage and charge storage per unit mass and unit volume in part due to lithium’s small size, which places it third in the periodic table after hydrogen and helium.

Numerous materials can be used as electrodes in Li-ion batteries. The most typical cathode and anode materials are lithium cobalt oxide (cathode) and graphite (anode), and these materials are most frequently found in portable electronic devices like laptops and cell phones. Other cathode components include lithium iron phosphate and lithium manganese oxide, which are utilized in hybrid and electric cars, respectively. As an electrolyte, ether (a class of organic chemicals) is frequently used in Li-ion batteries.

A lot of people ponder whether lithium batteries are really more economical. The initial cost of lead acid batteries may appear lower. Ionic lithium batteries will end up saving you money over time. Why? They are more durable, lighter, and more effective, to put it briefly. You’ll save money on petrol and buy fewer batteries, in other words.
Technically speaking, the difference is in the components we utilize to make lithium batteries and the manufacturing process. Unlike our competitors, who utilize Grade B or C cells, we employ Grade A cells to make our affordable lithium batteries. This maintains performance levels throughout numerous cycles.
Ionic lithium batteries also employ flat cells with a 20Ah and 25Ah capacity. This decreases heat buildup, minimizes connection points, and establishes equilibrium in the cells.