Scope of a variable

In the above definition of function, the fisrvariable and secondvariable are visible to the “afunction()” but the third variable is unknown to it. Limiting the visibility in programming has many benefits. First of all it helps you to provide security. Secondly, it helps the programmer to avoid mixing the values of different variables by different functions. This is an important feature of structured programming. It is also an important feature of object oriented programming.

Types of variables based on visibility

Local variables are those that are local to the function definition. It means they are only accessible where they have been declared. They are not accessible to the other functions defined in the same program.

As it can be seen the variable “age” is declared at the top of the program and it is accessible to both functions. The first function sets the value of age and the second function displays its value.

The global variables belongs to the static storage class which means they exist throughout the program. They are not like the local variables that are created only at the time of a function call and then destroyed once the function is executed.

both static variables t1 and c1 retain their values after the function takeavg() returns, so they are available the next time if needed.

Example of scope of variable

int x=10;  //this is the global variable as it is outside the main function 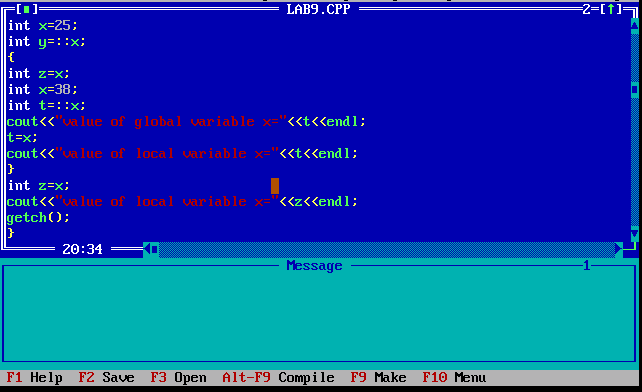 From above discussion it is concluded that the scope of variable is chosen by the programmer as per the need. If we want to keep the value accessible throughout the program then it is preferable to declare them as global variables.

you can also read here:

How to define and implement recursion in C++ programming?