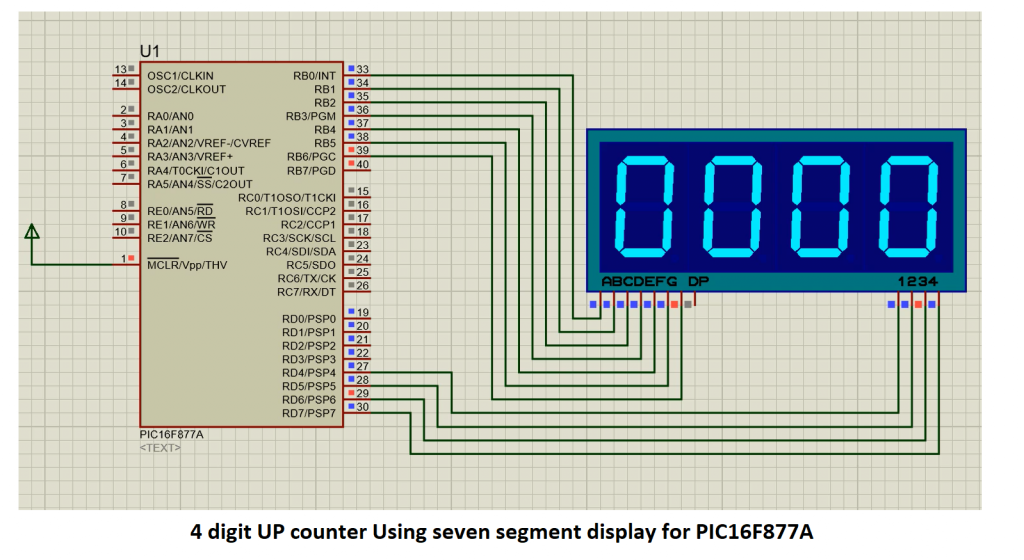 Write a program forInterfacing of seven segment display with pic16F877A microcontroller using mikroC Pro. In this tutorial, I will guide you how to create a first project on mikroC Pro software for designing a counter using PIC16F877A microcontroller. First mikroC Pro code simulations will be shown. For checking the result PROTEUS simulations will also be shown. Finally I will show the results on PIC development board.

Basic components of the circuit involved

In this tutorial deign of 4 digit UP counter will be explained. The major components involved are mentioned below

If you are using a PIC development board, then you can easily write and test your program.

In order to import the HEX file we need a programmer or burner that will actually transfer code to the ROM of microcontroller.

Here is the description of PinOut of PicKit 3

There are three LEDs and a button on its front face. These LEDs have specific meaning and are named as

What is the seven segment display?

So with this arrangements of LED, any number ranging from 0 to 9 can be displayed.

There are two types of seven segments.

In these seven segments displays all the anodes of LEDs are tied together just like shown below and we need to apply separate signals at the cathode terminals for turning ON/OFF the particular LED. As we know that we can turn ON an LED if anode to cathode potential is High (+5V). Here anode is connected to +5V or Vcc and cathode is tied to 0v if we want to turn ON any particular LED.

In this type all the cathodes are tied together and hence we need to apply 0V or GND to this common terminal while any pin (a,b,c,d,e,f,g) will be connected to high logic level (+5V) in order to turn it ON.

Lets see how these arrangements help to display a number

This code can be run either on MPLAB or MikroC Pro. For the time being I am using MikroC Pro as it is eay to configure. In this Project PORTB is used for connecting pins of seven segment display while PORTD last 4 pins (4,5,6,7) are used for selecting the segments. (S1,S2,S3,S4). As I have used common anode seven segment display thats why I have used the following sequence of Hex values for displaying the numbers. The Table Shows the exact values.

Proteus Simulations for the seven segment UP counter