4-bit binary counter with parallel load. A binary counter  is simply circuit  which comprises of several flip-flop connected in series for each  pulse of input the flip-flop toggled and then this given as input to other flip-flop which again toggle it in this  way different binary number are generated which we can used for timer and clock. Reversible logic has contemplated as a systematic computing technique having its applications in quantum computing and minimum power computing. All of the Boolean functions can be implemented with the help of reversible gates.

What is a Counter?

Counter is basically a register that goes through a predetermined pattern of states. Gates in the counter are arranged in such a way as to generate the prescribed pattern of binary numbers. These gates build a counter circuit. Parallel load counter can be used to create any desired count pattern. A 4-bitcounter with parallel load can be helpful to produce a BCD count in two major ways which are given below:

What is Binary Counting?

or ‘bit’ of the binary number represents a

power of two. All you want to do a conversion from binary to decimal is added up the applicable powers of 2. In the given case, there is a need to calculate that the binary number 10110111 is equal to 183. Then the figure also indicates that 8 bits combine up what is called a byte. Nibbles are defined as the upper while 4 lower bits of the given byte. Referring to all the bytes and nibbles which are helpful when dealing with other number systems like hexadecimals. The base of hexadecimal system is 16.

Initially, starting with the study of counters there is few essential information that helpful to be understood. The most essential fact that since the outputs of a given digital chip can only be in one of two further states, it must should apply a different counting system than you are usual to. Commonly, we use a decimal counting system which is defined as a meaning each digit in a number is denoted by one of 10 digits (0-9). In case a binary system, there can only be two digits, 0 and 1.

What is reversible logic?

In case of reversible logic section, we describe the design and functionality of a given reversible gates which are used in our structure. Few of these reversible gates are defined to compare with other logical sections. Finally, we will study about all the quantum gates. There is a one-to-one correlation between the inputs and the outputs of the gates. Hence, an n-input n-output function F is reversible in this case. In this way, the input vector will be calculated from the output vector. Most of the technologies such as CMOS, optical circuits and nanotechnology can be through primary reversible logic gates.

What are the reversible Logic Gates?

An n x n reversible gate can be indicated as in the given form:

I v and O v are input and output vectors commensurately. If n inputs in circuits are given, then exists 2n reversible n gates. A set of unite gates made the reversible circuit. These circuits consist of parallel lines same as the musical lines. Actually, the inputs/outputs of the circuit are made up of these lines. Work of the music pieces is a basis form that design and implement irreversible circuit. These gates have not same practical difficulty and quantum cost. These essential factors are variable and depend upon the designs. 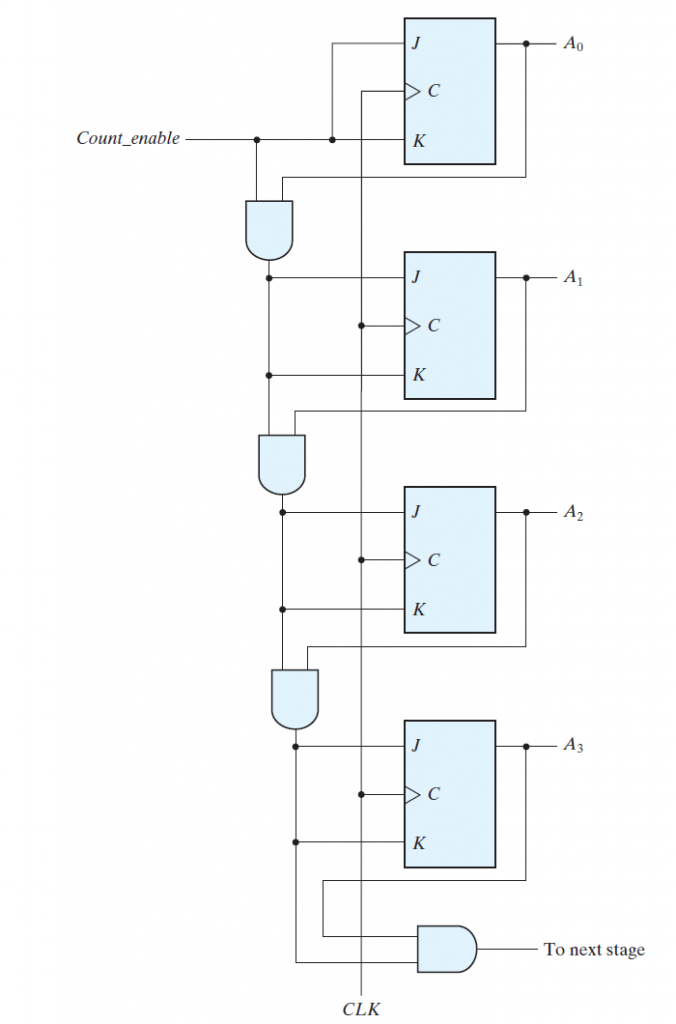 As given in diagram that we make a binary counter by using jk-flip-flop in which when both inputs are one then it toggle output .So for binary counter I give the first jk-flip flop direct count and to other of them I  give the output of all the flip flop which comes before it so if the output of any flip flop except the last one is one and the count is enable then it got toggle and in the last  carryout when all the flip-flops output are one so in this  a simply  binary counter works now here we understand the working of parallel load circuit its diagram is given below

As given in the above diagram that we apply load at the one of the inputs of all the circuit gates  and we connect the second inputs of the gate with our actual input in such a way that a normal input if is applied on one gate then its complement is applied on the gate whose output is going to the same flip-flop with which it is connect in simply we apply the input on the circuit in such a way that complement of j input of flip-flop is applied on k input of flip-flop .So as a result of it  whenever the load is enable the applied input is carried to the resistor circuit.

Now this is the binary counter circuit with parallel load. Let’s explore it’s working. As we know that in a circuit we enable only one out of both load and count at time. Therefore, when load is enable then all the and gate passes the value of load to the resistor circuit. Similarly, when count is enable then circuit passes the value of count to resistor circuit and when both of them have zero value then jk flip-flop work as memory state. So in this way the binary counter with parallel load works. Now here if we look the generic view of this circuit. Then its block diagram is given below

Here if we look at the table of the given circuit in the form of clear, clock, load, and count then the function of given circuit look like that

Now if we look in the table then we come to know that when clear is zero the all means clock load count fall in condition of don’t care then the function output also becomes clear to zero. The next important term in the table is load when its value is one then the flip-flop takes the value of all the parallel loads instead taking count value. Similarly, when count has a value of one the flip-flop circuit moves to next binary start. In the last when both of them has zero value then no change occur at the output.

What are the flip flops and registers in digital design?