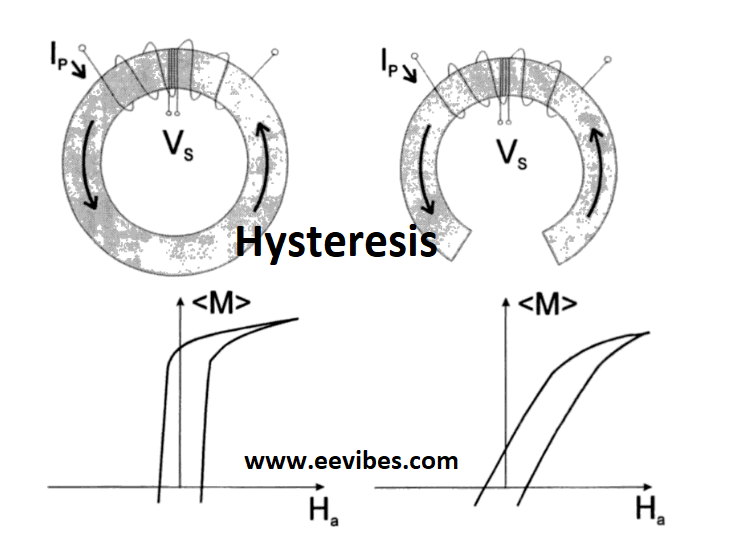 What is the Hysteresis loop? Hysteresis means ‘lagging’. It is actually the dependence of the state of any system on the history of the system. Hysteresis can also be a variable/dynamic lag between an input and output that disappears if the input varies more steadily. While we are talking about electronic circuits, we often characterize hysteresis as lag of magnetic flux density behind the magnetic field strength.

Basically there are two types of hysteresis.

In this type of hysteresis, there is a lag or a phase difference between input and output signal. A sinusoidal input wave that transforms into a sinusoidal output wave can be expressed as below where there is a phase lag.

This type of hysteresis is referred to as rate-dependent hysteresis. If the input signal becomes zero, the output continues to respond for a very short limit of time. This resembles to be a memory of input signal which the output is showing. The phase lag between input and output depends on the frequency of input, and goes to zero as the frequency decreases.

This type of hysteresis is found in the systems that still have an effective memory pattern of past that still remains even after the transients die out. The future of these types of systems is based upon the past of states visited by the system.  But the past doesn’t fade with the passage of time.

Hysteresis loop is used to show the relationship between magnetic flux density and the field strength due to magnetism. This loop is generated by measuring the magnetic flux from the ferromagnetic material while the external magnetic field is being changed.

If flux density is taken on y-axis and the magnetizing force is taken on the x-axis, then the results are plotted in graphical form. These results show hysteresis loop.

It is defined as the amount of magnetism present when the external magnetizing field is removed. It is actually the material’s ability to retain a certain amount of magnetism even after the magnetic field is removed. It is shown in the hysteresis loop as the point when the graph line intersects the positive y-axis. And its negative is given as the point on negative y-axis where the reverse graph intersects.

It is defined as the total amount of reverse external magnetic field require to completely demagnetize the substance. Its value in the graph can be plotted at points where the graph intersects with the x-axis irrespective of the direction. Then we have both positive and negative coercive force.

$$
P_B=\eta * B_{\max }^n * f * V
$$
Where $P_B=$ hysteresis $\operatorname{loss}(\mathrm{W})$
$\eta=$ Steinmetz hysteresis coefficient, depending on material $\left(\mathrm{J} / \mathrm{m}^3\right)$
$B_{\max }=$ maximum flux density $\left(\mathrm{Wb} / \mathrm{m}^2\right)$
$n=$ Steinmetz exponent ranges from 15 to 25 depending on material
$f=$ frequency of magnetic reversal per second $(\mathrm{Hz})$
$V=$ volume of magnetic material $\left(\mathrm{m}^3\right)$
A transformer is the best implementing example of hysteresis loss. Energy is lost during magnetization and demagnetization of its coil. In transformers, continuous loss of energy in the form of heat causes the efficiency of transformer to decrease. To increase the efficiency of transformer and to reduce this hysteresis loss, soft iron is used. Because the hysteresis loss in case of soft iron is very low than other materials.

What are Different Types of an Inductor?

What is the Battery Life?

What are the Active and Passive Elements?