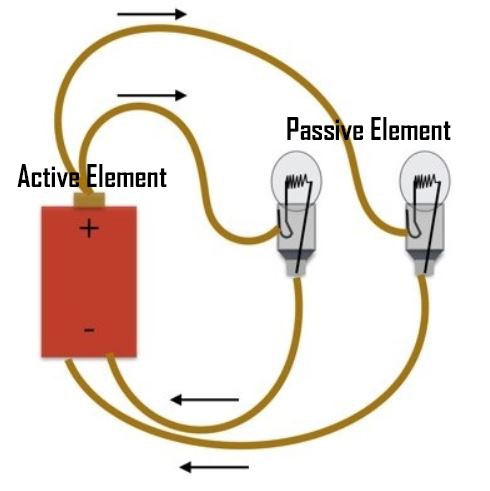 What are the Active and Passive Elements?  In electrical engineering or electronics, we often come across terms for which we do not know their meanings but we use them frequently while making circuits or any other device. These terms may be power sources, resistors, inductors or capacitors, or maybe anything from the electrical directory. These components are the essentials of any electrical circuit because if we remove them, only connecting wires are left but also the connecting wires are conductors, thus nothing is left in the circuit.

Speaking of these components, there are methods how to differentiate these elements from each other. It is quite easy. After looking at their functions, one can easily differentiate between them. But there exists some common relation between most of them. Hence, they are categorized into different categories. These categories are then divided on some basic and stealth differences between the components held within them. Here we will discuss these categories deeply and will ty to understand the true nature of these elements.

In electronic circuit, there are two main types of elements. ACTIVE & PASSIVE ELEMENTS. Both these elements combined form the basis of electrical circuit components. The main function of an active component is to supply energy to an electronic circuit hence, it has the ability to control the flow of charges all across the electric circuit. Whereas, the functionality of a passive element can be receiving energy. These elements either dissipate or absorb energy according to their function. Let’s dig deeply into both these elemental categories.

A voltage source is a common example of active component in a circuit. When it supplies voltage to the circuit, current starts flowing. As a result, energy is being supplied. A battery is also an active element as it continuously delivers energy to the circuit during discharging. Read here about Independent DC Voltage Source. Also what is the ideal voltage source?

The function of a transistor is to amplify the signal power. Unlike current and voltage sources, transistors do not directly supply any current or voltage. Yet they are regarded as active components due to their functionality. Because amplification is necessary to regulate the flow of charges.

A diode acts as a one-way switch to current flow. Playing its crucial role in the circuit as current regulator and switch, it is also included in the list of active components. Read more about diodes and their characteristics curves. Also check the diode models here.

What are the Passive Components ?

A passive component is a part of electrical circuit that mainly focus on consuming energy. Speaking clearly, a passive element receives energy coming from an active element. The consumption is according to the functionality of the component whether to transfer it, dissipate it, absorb it or store it. These components are regardless of any electrical power to operate them.

Their name shows that these components do not show any gaining or amplifying properties. Concluding the fact, these elements cannot amplify, oscillate or generate an electronic signal.

Some common examples of passive components include

What are the Resistors?

Resistors are the most basic and common elements of an electrical circuit network. These simple elements cannot deliver any sort of energy to the circuit that can be useful. Instead they only receive energy and process it according to their function or capability. The most common function a resistor performs is to convert electrical energy into heat as long as the current if flowing through it.

What are the Inductors?

An inductor has the capability of developing voltage in the direction that reduces flux (Lenz’s law) when an ac current flows through it and thus result in storing electrical energy in the form of magnetic energy. The inductor can deliver this energy to the circuit but not on continuous basis. The energy capacity of being absorbed and delivered of an inductor is limited and transient. Thus inductor makes it name into the list of passive elements. Also read about what are the electrical properties of inductor?

What is the Capacitor?

Now comes the second most common element in the electrical circuitry network. A capacitor stores charge in it as electric field. Again like inductor, the energy dealing capacity of an inductor is far limited and transient. In fact, it is not actually transferring energy, it is storing it for use later. Thus this property makes it worthy for the passive elements list. Also read about what are the properties of an ideal capacitor?

Transformer consisting of 2 plates generally, due to mutual induction between them, transfer electrical energy from one circuit to another. It is generally used for electrical power transmission with the help of electromagnetic induction. It transfers electric power without any frequency modulation. They actually raise voltage levels but power is kept constant. As energy is not amplified, transformer writes its name in the list of passive elements .Read more about transformers here. Also check What are the Three Phase Transformers? and How to improve the power factor?

When current is conducted with same magnitude regardless of the direction, the element causing it is called bilateral circuit element. It however, offers some resistance to current flow in both directions.

What is the maximum Power Transfer Theorem? Formula and Examples