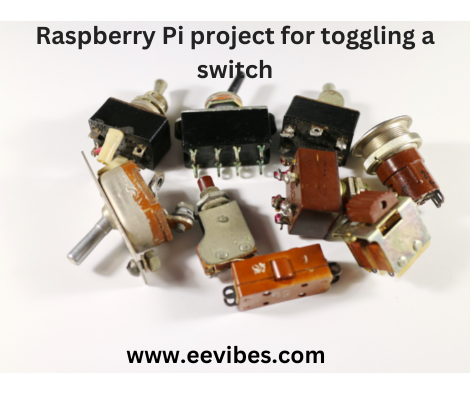 Design a Raspberry Pi project for toggling a switch

How to Design a Raspberry Pi Project for Toggling a Switch?

The Raspberry Pi is a low-cost, computer-sized computer that connects to a computer monitor or TV, and uses a standard keyboard and mouse. It is a small, efficient tool that enables people of all ages to scan a computer and learn to type in languages ​​such as Scratch and Python.

It can do everything you would expect a desktop computer to do, from browsing the internet and playing high-definition video, creating spreadsheets, word processing, and playing games.

The Raspberry Pi has a 700MHz single-core processor and a Video Core IV GPU. Playing with a small 256MB of RAM, the Pi is a modest piece. It uses an SD card in its operating system and data storage. Keep in mind that the main purpose of this chip is to enable a cheap computer with a basic level of performance, especially for education.

These are the Raspberry Pi models currently available:

Model A / A + has one USB port, Model B has two ports, and Model B +, Raspberry Pi 2 Model B, and Raspberry Pi 3 Model B have four ports. This can be used to connect multiple USB 2.0 devices. Additional USB devices such as mice, keyboards, network adapters, and external storage can be connected via a USB hub.

The standard SD card installed on the board acts as a Raspberry Pi hard drive. It is powered by USB and video output can be connected to a traditional RCA TV set, a modern monitor, or a TV using an HDMI port. This gives you all the basic computer skills. It also uses an extremely low power of 3 watts.

A powerful feature of the Raspberry Pi is the GPIO anchor line (general-purpose input / output) pins at the top edge of the board. The 40-pin GPIO header is available on all current Raspberry Pi boards (not included in Pi Zero and Pi Zero W). Prior to Pi 1 Model B + (2014), boards had a short 26-pin header.

Any GPIO pins can be selected (on the software) as an input or output pin and used for various purposes.

One of the ways to edit in raspberry pi is to use “python”. Python is a powerful and professional language, which is good for beginners and very fun to learn. A very simple introduction to Python by Thonny, the Python3 development environment. Because one of Python’s main goals was to be read and stick to simple English, its “hello world” program is as simple as possible.

The ability to directly control GPIO pins (standard plug-ins) is one of the reasons why the Raspberry Pi is so popular among the hobbyists and educators.

In this project, it will show the status of the button, determine if it is pressed or not and then, turn off or off the LED.

You need a system to tie these instruments together; read the status of a button and send signals to illuminate the LED.

First we need to familiarize some terms which are:

The next part is how to change. This is done by remembering the previous status of the button and if it changes, find out if you turn off or off the LED.

// set the pin mode as either INPUT or OUTPUT

// at every button press, toggle the state

// add delay to avoid the bounce

Here, we saw how we can learn to install a button and record the output to illuminate the LED using the GPIO Raspberry Pi pins. Once we have mastered these basics well, then the same information can be used to drive other loads such as transfers, vehicles etc.