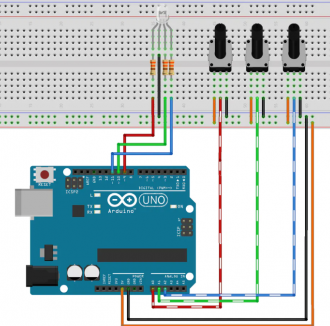 Introduction to Arduino Based Color Mixer

How to Design an Arduino based Color Mixer? Basically, we generated some colors that we can see with some twists like changing colors in some mixing form. For this purpose, we use an Arduino UNO board (model R3). We sketched the program for color mixing project in Arduino computer application and then after powering Arduino board with DC supply we connected Arduino board with laptop using data cable and uploaded code to Arduino.

Beside this, we used some basic electronic components including Arduino board, variable rotatory potentiometers, breadboard, RGB LED, resistors.

We used Arduino board to program a color mixer by using breadboard and some electronic components and sketching code in computer application.

First of all, we brought all components mentioned above. We sketched Arduino program for color mixing project. We setup Arduino board by giving it DC supply. We used breadboard for constructing circuit.

In the given diagram pot is used as voltage divider circuit whereas, Arduino pin is Vout.

The variable amount of voltage (changed by twisting the rotor) is transformed simply and transfer to the Analog input pin(Vout) of Arduino.

Now, connect the pot in the breadboard as shown. Moreover, connecting 5volts or GND at either terminal of Arduino does not matter. As the middle terminal is connected to the analog input pins, Hence, it is the most important connection over here.

And hence, 5Volts and GND is obtained from the Arduino pins.

Design of the circuit

The above process is repeated for three (3) pots for given colors.

For arranging neatly and in order, connect the red color Led to A0 pin, green color pin to A1, and Blue to A2.

Conventional LED (diode) concept is like that of RGB LED. The process occurs due to having 3 different colored LEDs next to each other. As the 3 LEDs are connected combinedly so are shown just like one led and when powered they luminate as single LED and hence, we see some mixed colors rising from one LED.

As we connect any other simple LED, the same way we connected the RGB LED and just repeated this process 3 times.

The result must look like, we connect red value to the lower most pin on the input and output, just to make sure the things are simple, and to avoid complexity in code.

pinMode(inRGB[i], INPUT);       // Prepare those pins to read the potentiometer values

pinMode(outRGB[i], OUTPUT);      // Prepare those pins to output the values of the RGB LED

// Repeat the following for each color

// Write the output on the pin

Where the potentiometer with built-in switch (off/on) is used to control the brightness of an RGB LED.

The user is greet up with the Color mixer page due to the selection of basic primary and secondary colors, after which the user can freely mix and match to their liking. You can choose your colors from the pre-existing shades offered on the website or add custom colors.

Other Projects of Arduino