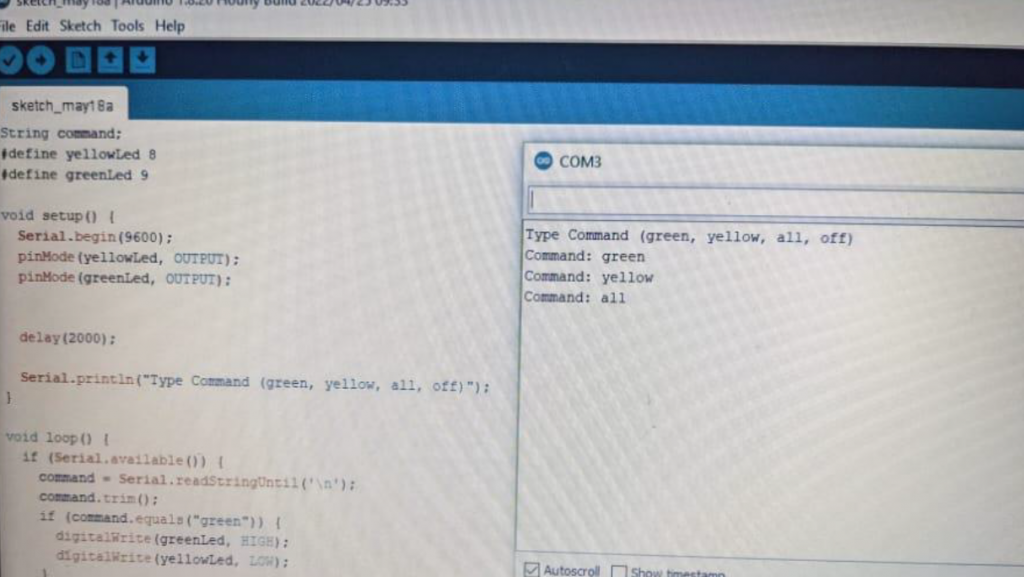 Serial Communication provides a simple and flexible way for your Arduino board to interact with your computer and other devices. This explains how to use this feature to send information to your computer using Arduino, Arduino UNO is an open-source, inexpensive, flexible, and easy-to-use programmable microcontroller board that can be integrated into a wide variety of electronic projects. This board can be connected to other Arduino boards, Arduino shields, Raspberry Pi boards and can control relays, LEDs, servos and motors as output. By the help of this we can turn on LEDs, fans or pumps.

Arduino Board can be powered through a Ac to Dc adapter or a battery. The power source can be connected by plugging in a 2.1mm center positive plug into the jack of the board.

A microcontroller is an integrated circuit (IC) used to control other parts of an electronic system, usually through a microprocessor unit (MPU), memory, and some peripherals. These devices are optimized for embedded applications that require both processing functionality and agile, responsive interaction with digital, analog, or electromechanical components. At mega 328P is used on this board.

The Arduino ATmega controllers have an internal 6 channel analog-to-digital (A/D) converter (8 channels on the Mini and Nano, 16 on the Mega). The converter returns numbers ranging from 0 to 1023 with a resolution of 10 bits. While most Arduino users utilize the analogue pins to read analogue sensors, the analogue pins also have all of the capability of general purpose input/output (GPIO) pins (the same as digital pins 0 – 13).

The aliases A0 (for analogue input 0), A1, and so on can be used in the same way as the digital pins. To set analogue pin 0 to an output and make it HIGH, for example, the code might look like this:

Be aware however that turning on a pull-up will affect the values reported by analogRead().

These pins are labelled as Digital 0 to 13. This pins are used for output and input pins.

USB port is used to load a program. It is also known as power port.

A passive two-terminal electrical component that implements electrical resistance as a circuit element is called resistors. In electronic circuits, resistors can be used to reduce current flow, adjust signal levels, to divide voltages, bias active elements, and terminate transmission lines, among other uses.

A thin plastic board used to hold electronic components (transistors, resistors, chips, etc.) that are wired together is called breadboard.It is used to develop prototypes of electronic circuits, breadboards can be used for future jobs. They can be used to create different kind systems but difficultly become commercial products

LEDs A semiconductor light source that emits light when current pass through it is called LEDs (light emitting diodes). In the semiconductor electrons combine with electron holes, releasing energy in the form of photons.

 Take all the components.
 Then first insert the green light on the right side then yellow after him on the breadboard.
 Attach the resistor with positive side of LED(green) and one side of the resistor attach with Arduino’s digital pin number 9, the negative pin of LED attach toh breadboard ground.
 Then attach the resistor’s one side with positive side of LED and then attach to Arduino digital pin number 10, the negative pin of LED attach to the ground of breadboard.
 And then attach the buses with each by connecting wires and the attach ground of breadboard with Ground of Arduino.
 Now by USB connector connect Arduino with your computer.
 Then open the software on your computer and enter the desired code.
 There is an arrow on the title bar press on it. TX and RX LEDs blinks of Arduino which means your code is being uploaded on the Arduino.
 After entering command the LEDs blinks individually then both on and off at a time by entering the command in the command window.