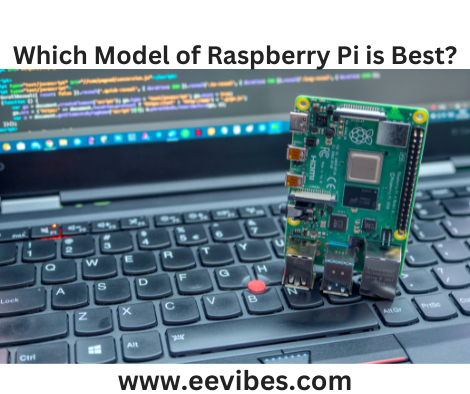 What is the Raspberry Pi Model ?

Which Model of Raspberry Pi is Best? Raspberry Pi is a single small computer board which was first developed in the United Kingdom by the Raspberry Pi foundation. In 2006, Atmel ATmega644 were the basis of early concepts of raspberry pi. Originally, it is leaned towards the computer science teaching promotion in developing countries and in schools. The original pi model became more famous than anticipated.

Due to its low cost and open design, it is used in wide range in many areas like weather monitoring. Because of adoption of USB and HDMI devices, it is used by computers and electronic hobbyists.

The raspberry pi is one of the most selling British computers. It will act as a mini personal computer if we connect peripherals like keyboard, mouse, display to the raspberry pi. For robotics applications, IoT based applications and for real time image/video processing Raspberry Pi is used.

It is slower than laptop or desktop but is still a computer which at low power consumption provides all the expected abilities or features. It also provides access to the on-chip hardware i.e.

GPIOs for developing an application. From 700 MHz to 1.2 GHz, the CPU speed of raspberry pi varies. There are seven different versions of raspberry pi. It is a capable small device that allows people of all ages to explore computing, and to learn how to program in languages like c and python.

Out of all models, raspberry pi 4 is the best with highest potential specifications for many general-purpose projects. The power of computing and digital making is given by the foundation of raspberry pi into the hand of people all over the world.

Architecture of Raspberry Pi 4 model B

In June 2019, the Raspberry Pi model 4 B was launched. It has three RAM options (2GB, 4GB, 8GB), integrated 802.11ac/n wireless LAN, gigabit Ethernet and Bluetooth 5.0 and uses a 1.5GHz 64-bit quad-core Arm Cortex-A72 CPU. It is the low-cost Raspberry Pi’s latest version. In cheapest form, it doesn’t have a case, and is simply a credit-card sized electronic board.

Pi 4 boards can be used as media centers, file servers, routers, retro games and network level ad-blockers for starters. In many projects people have used the pi model like to build tablets, laptop, phones, robot, smart mirrors. Keep in mind it’s just a bare board, you’ll require a power supply, a monitor or TV, leads to connect the monitor, a micro-HDMI cable, mouse and keyboard. Using USB-C port, it can be powered allowing additional power to be provided to downstream peripherals.

How to program Raspberry Pi

Python IDEs are preinstalled on the operating system of Raspbian when it comes, that you can use to write your programs. Mu is one of these IDEs. It can be found in the main menu:
Raspberry Pi Icon —> Programming —> Mu
For the first time when you open Mu, you’ll be given the option to select the python mode for the editor. It is the possibility that python is not preinstalled on your version of Raspberry, then you can install it using following file location:
Raspberry Pi Icon —> Preferences —> Recommended Software
To start with python on Raspberry pi, Mu provides a great editor.

How to design RISC based CPU in reversible logic scheme 2022?