How to Determine the Overflow of Signed and Unsigned Numbers?. Numbers represented in computer system have always have a specific range. It depends on how many bits your system process. Some systems are 32 bits while other are 64-bits. With the advancement in technology we have now larger bits processing systems. But they have limited range of numbers they can represent. Overflow refers to the condition when the given bits can not represent the given number. It means that number needs more bits for its representation. There is another situation where the number is small enough and not representable according to the given pattern of numbers. This is called underflow.

How to define and determine overflow of signed numbers? Unsigned Integers are little bit tricky to understand. All we need is little bit more attention for understanding them. Whenever a number is treated as signed then it be either positive or negative. In binary representation, the most significant bit (MSB) is reserved for representing the sign. If  MSB=0 then the number is positive and if MSB=1, then the number is negative.

Determining the range of signed numbers

For 8 bit numbers, msb is reserved for sign so all bits will be equal to 1( 01111111) while representing the largest positive number. The weighted binary sum of this combination gives

The smallest negative number is 1000 0000 means all other bits are equal to zero and only sign bit is set high.

How negative numbers are stored?

The negative numbers are usually stored as 2’s compliment or by taking the one’s compliment and then adding 1 in it.

What is the machine epsilon?

Consider we want to store -3 in computer

first find its binary combination in 8 bits that is

take one’s compliment (For this invert all bits) so

so in this way any number can be stored.

In case of 8-bit numbers

if both numbers are treated as unsigned numbers , then the first combination gives (65535) and second combination is equal to 1. Adding both of them will result 65536 that is out of range of unsigned integers (as 65535 is the largest possible value). Here unsigned overflow occurred.

If the above number is treated as unsigned then its value is (32767). As both numbers are same so when we add them we get, 131068 which falls within the range of unsigned integers. So, no unsigned overflow occurred.

From above examples it is concluded that signed overflow occurs during addition when there is a carry out of MSB. Which means the represented number is greater than the available bits or biggest numbers FFH for 8-bits and FFFFH for 16 bits. During subtraction the unsigned overflow occurs when there is a borrow into the MSB. In this case the correct answer is actually smaller than 0.

During addition, if both numbers that you are adding are positive but the resultant is negative, then signed overflow occurs. When numbers are of different signs during addition, then signed overflow is impossible. As A-B or -A+B will always be smaller than the available bits.  While in subtraction, if the resultant has different sign as expected then it will cause overflow.

How overflow is indicated by the processor in computer?

Easy way to determine the overflow

Quiz for Testing your Knowledge of Overflow

Test Your Knowledge Overflow of numbers 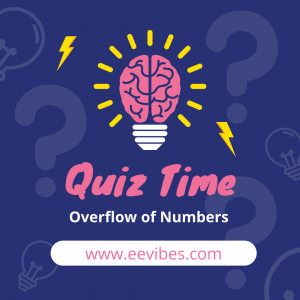 One thought on “How to Determine the Overflow of Signed and Unsigned Numbers?”