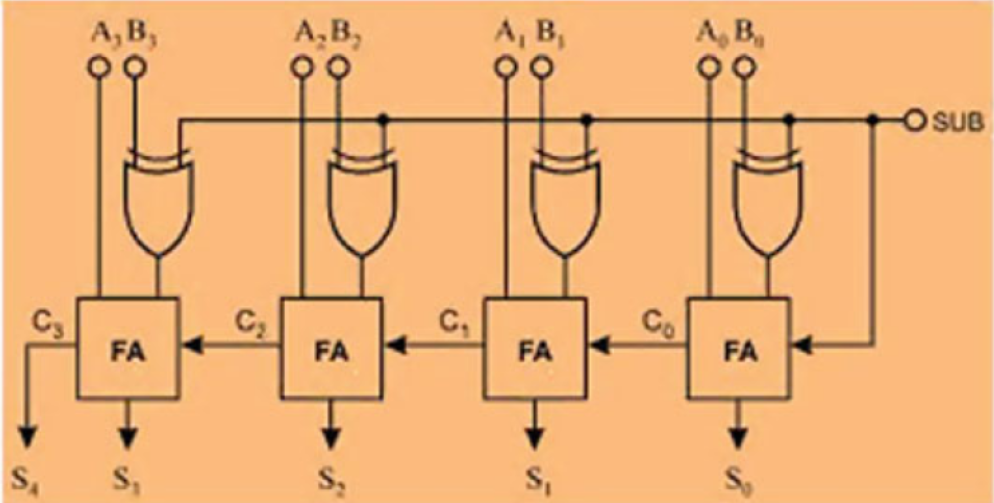 How to Design a Four bit Adder-Subtractor Circuit?

In this article you will learn about how to design a four bit adder-subtractor circuit? Every Digital Computer should always execute two arithmetic Operations: addition & subtraction. Multiplication & Division operations become simple if both of these tasks are implemented properly (Multiplication is equivalent to repeated addition, whereas division is equivalent to repeated subtraction). Take into account the process of trying to add multiple binary numbers, that is the basic operations executed by a computer system. The four fundamental addition operations for multiple binary numbers which are single bit, are as follows:

Every Digital Computer should always execute two arithmetic Operations: Every binary addition during first 3 operations yields a total of one bit, namely, either zero or one. However, the output of the 4th addition operation (with inputs of One and one) is 2 binary numbers. here lower significant bit usually referred to as ‘Sum Bit,’ whereas higher significant bit has been referred to as ‘Carry Bit.’

A full adder within Digital Logic

The full adder is an added that takes three inputs &generates two outputs as a result. The first 2 inputs typically A & B, with the third being a C-IN input carry. Output carry generally labelled as C-OUT, whereas normal output labelled as S, that stands for SUM.

A half adder is a type of combinational arithmetic circuitry that uses two numbers addition and outputs an S, sum bit, as well as a C, carry but.  The S (sum bit) is the result of the XORing of A & B, and also the C (carry bit) is the ANDing of A & B, if A & B, seem to be input bits.

Binary Adder-Subtractor comprises a digital circuit that can perform basic arithmetic of binary integers in the same circuit. The binary result of a control signal determines the operation to be executed. It’s among the ALU‘s, arithmetic logic unit elements

XOR Gate, Full Adder, and Binary Addition & Subtraction, are all prerequisites for this circuit.

Designing: A single basic binary adder may do both addition & subtraction tasks. As illustrated in the diagram underneath, a binary circuit may be created by combining an Ex-OR gate alongside every full adder. 4-bit parallel adder and 4-bit parallel subtractor shown below has multiple 4 bit inputs labelled ‘A3 A2 A1 A0’ & ‘B3 B2 B1 B0’.

The carry input of the of the full adder’s least significant bit is linked to the mode input control line labelled as k. The kind of execution, either addition and otherwise subtraction, is determined by such a control line.

If k equals to 1, circuit is just a subtractor, but when k equals to zero, it is then converted to an adder. XOR gate has 2 inputs, only one of which being Linked to the B, the other to the input k. Whenever k = 0, B Ex-ORed 0 results in B. Next, full adders perform addition of B & A with carry input 0, resulting in addition operation.

Also see : How to Design a 4 bit Magnitude Comparator Circuit?

What is the difference between fan-in and fan-out? Examples

It is used for the addition of significant digits.(carry)
The logic gates which are used in Binary full-adders are And gate, OR gate and EXOR gate. In practical life, the applications of full adders are that they are used in digital processors.

It is used for addition of Least significant digits. The logic gates involved in half adders are EX OR gate and AND gate. Half adders are practically used in digital measuring devices like calculators.

How to design Half adder and Full adder circuits?

It is a digital circuit used for subtraction of binary numbers using logic gates. In this we add (2’s compliment and 1) on the number from to be subtracted. For example we have to subtract A from B, We do A+ (2’s compliment of B+1). Two types: Half-subtractor and Full-subtractor.

It is the circuit in which subtraction of two bits is done by borrowing. There are three inputs and two outputs.

Basically it is a digital circuit which does both addition as well as subtraction itself. This circuit works using an EX-OR gate, binary addition and subtraction, Full adder.

We will need four full adders. Supplying them inputs respectively, A0, A1, A2, A3 for first adder, second adder, third adder, and fourth adder. Now the second input for adders would be output of EX-OR gates, Same as input A, There would be attached four EX-OR gates with all adders respectively. As we all know that this EX-OR gate will have two inputs. The first input of this EX-OR gate would be named as B, and as done previously

Lets see its working with an example:

Now considering M to be 1, So all inputs of XOR would be 1, as per truth table of XOR if we XOR any value with 1 it would always be compliment of that value. So B0 XOR 1 would be B0’(B0 compliment). B XOR 1 would be B1’ and so on.
so if we provide M to be 1 then input to full adder becomes compliment of B So it becomes A + B’ + 1. Which is nothing but our subtraction. So formula for subtraction is M= A+B’+1 by (taking value of M 1)

Consider the advanced version of  4-bit adder-subtractor circuit which comes with carry (C) bit and overflow (V) bit. The role of C pin is to determine the overflow in the unsigned numbers. If C=1, then there is a carry out in case of addition (indicating unsigned overflow) or a borrow in during subtraction.

V bit is used for indicating the signed overflow. Let us consider the case for understanding the concept of overflow. Basically overflow occurs when we add or subtract two n-bit numbers and the resultant is of n+1 bit.

Now, assume the case when we want to add two numbers A=1000, B=0101. If we treat both numbers as unsigned, then A is equal to 8 in decimal and B= 5 in decimal. To see how we perform number systems conversion, check the link.

If you will perform A+B bit wise

There will be no carry out. Now if you convert this binary to decimal you will get the result is equal to 13. So unsigned overflow did not occur. Now consider the other case when A=1001 (9) and B=0111 (6). When you will perform bit wise addition, you will see there is a carry out (C) from the last full-adder. Which will indicate the unsigned overflow. Since 9+7=16 which is actually out of range of 4-bit numbers. If you will consider the 5-bits (10000) including the carry bit C, then the result is correct otherwise 4-bit sum (0000) shows the wrong result. V=0 in this case.

Role of C and V pin in adder-subtractor circuit

Now again assume same inputs A=1001 and B=0111. But this time we are going to perform the subtraction A-B considering A and B as signed numbers. As we know that when we treat numbers as signed, the MSB represents the sign of the number. If MSB=1 then the bit combination represents the negative number and when MSB=0 then a positive number is stored. So in our case A=-ve number and B=+ve (7).

We can see what number A represents by taking its 2’s complement.

so it actually represents -7. When you will perform subtraction using the adder subtractor circuit, you will see V=1 and also C=1. This actually indicates there was a borrow in during subtraction (while treating them as unsigned numbers) and V=1 which actually shows a signed overflow occurred as explained in my video lecture given below. Since (-7)-(+7)=-14 which is actually out of range of 4-bit numbers. That’s why you will need total 5-bits for representing the correct answer.

How to determine the overflow of signed and unsigned numbers?