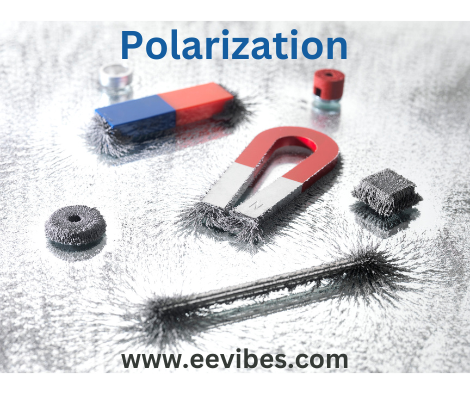 Polarization also decides the response of an object when it is placed in an electric field. Relatively it is also responsible for the changes that the electric field undergoes when an unknown substance is placed inside the field. Different materials exhibit different polarization. The interaction between the material and their polarizability give rise to many other different forces of nature. Being quite common quantity in the field of electromagnetism, electric polarization extensively explains the drift of charged particles or simple the displacement that a charged particle cover which then result into the formation of an opposing alternating current in the electric field.

When an external electric field is applied to a dielectric material, it causes the charged particles inside the material to show a bit of displacement. These charged elements, can be any particle, are initially bound to the molecule and are not allowed to move freely unlike free electron which move freely inside a conductor to conduct electric charge. These charged particles are then attracted by the applied filed and like charges repel whereas unlike charges are attracted towards the direction of field. As a result of this theory, positive particles are displaced in the direction of the field whereas the negative particles are displaced opposite the direction of the field. However, being bound by the molecule, they still remain inside the molecule and the molecule remains at its initial position.

For a specific volume ΔV of the material, the dipole moment is Δp, the polarization density P is given as

As we are familiar with the density, this formula is similar to the basis of density. As the dipole moment do not remain constant throughout the material, a change is observed in it. Hence the derivative will better explain the polarization density which is given as

The SI unit is given as coulombs per square meter. This definition of polarization density, dipole moment per unit volume, is commonly used in almost all the numerical problems. The charge which appear due to polarizing density is called as bound charge.

Gauss’s law is also implacable in the concepts of polarization. As gauss’s law states that for a given closed charged surface, the total electric flux is equal to the charge enclosed by the object divided by the permittivity. Thus for a given volume V enclosed by a surface S, the bound charge Q, as defined earlier, inside the object is equal to flux of P through S with negative sign

There are two types of polarization of molecules

Where α is the constant of proportionality and is called induced polarizability constant.

When a polarized molecule is produced as a result of induced electric field, the dipolar molecule tends to align itself according to the direction of the field. This is called orientation polarization and is given as

Where αo is proportionality constant and is called as orientation polarizability.

Thus we conclude in orientational polarization, the orientation of the atom is somehow changed keeping the original state of the atom constant. Temperature has some effect on this type of polarization. Thermal energy in dipole molecules results in the elimination of net dipole moment.

In any ionic compound where atoms are bound together by ionic bonds, when an external electric field is applied, the atom breaks resulting in the formation of its constituents that are cations and anions. These cations and anions after separation move far from each other and align themselves in opposite side of the atom, result in some valuable net dipole. However, in the absence of any electric field, the net dipole remains zero.

We have already discussed it above.

This type of polarization occurs when an external electric field causes the charges to accumulate between two plates or between two regions within a material. Thus a charge imbalance is observed because of insulating property of dielectric in the electric field. It generally occurs in compound dielectric materials.