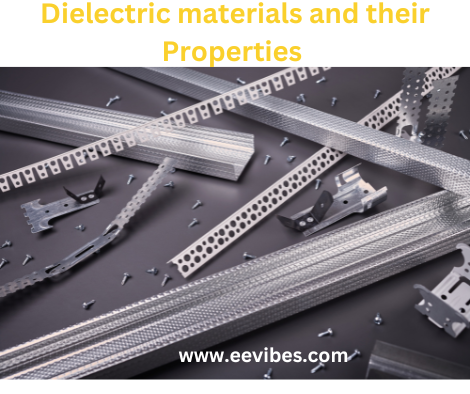 In this article I have discussed about what is the dielectric constant and its other parameters. In electromagnetism, a dielectric or a dielectric material or a dielectric medium is a poor conductor or a good insulator but a strong supporter of electrostatic fields. It can be easily polarized by an electric field. When a dielectric is placed in an electric field, like inductor, it does not allow electrons to flow from it due to no availability of free electrons. But instead of shifting of electrons inside the material, these electrons drift a bit. After disturbing their natural equilibrium position, they cause a phenomenon called dielectric polarization. Which we will discuss later.

The amount of polarization which occurs when a potential difference is maintained influences the amount of electrical energy that is stored in electric field. This property of a dielectric is described by dielectric constant of the material. Other important properties of a dielectric that describe its general features include dielectric strength and dielectric loss.

While inspecting the term insulator, we come across the procedure in which a material restricts it free electrons and the free electrons are not allowed to move and thus causing relative resistance. This causes the temperature of the material to rise due to excessive and rapid collisions of electrons. Thus a dielectric can also be defined as a device that stores charge, possess a high specific resistance and a negative temperature coefficient of resistance. The term dielectric was first coined by William Whewell, who later described the perfect dielectric as a material that shows perfect insulation or zero conduction and thus exhibit only the drift or displacement current of free electrons causing the device to store and return electrical energy just like an ideal capacitor.

What is the Dielectric Constant?

Where ε is the absolute permittivity and εr is the relative permittivity which is always greater than one. This ratio shows that when a dielectric is placed in any electric field it stores energy that is more than the energy of the vacuum state.

There is a limit to voltage applied on an insulator, beyond which it starts conduction. This voltage is called breakdown voltage. Air is a good example. It acts as an insulator but under certain specific conditions, it can also conduct electric charges. Exceeding the voltage limit can be dangerous as it can cause permanent damage to the device or sometimes complete destruction.

It refers to the energy lost as heat during conduction when a variable voltage is applied. These losses happen due to the drift of electrons in the medium. When the material changes polarization, these drifts appear as alternating current flow that may be large but is usually small. As permittivity is different for materials, dielectric losses also differ depending on the nature of materials.

Electric susceptibility of a dielectric determines how easily a dielectric can be polarized when it is introduced in an electric field. This proves quite useful as it determines the electric permittivity of the material and imparts a great deal on other basic and fundamental phenomena. It is defined as the direct relation proportionality between induced dielectric polarization density P and electric field E and is given as

$$
P=\varepsilon_o X_e E
$$
The relation between susceptibility of a medium and relative permittivity is given as
$$
X_e=\varepsilon_r-1
$$
in case of vacuum, this expression becomes zero
$$
\boldsymbol{X}_e=0
$$
The final expression is then given as
$$
D=\varepsilon_o E+P=\varepsilon_o\left(1+X_e\right) E=\varepsilon_o \varepsilon_r E
$$
Dielectric polarization
In the presence an applied electric field, the electron cloud around the atom is distorted. This give rise to dipole. When the electric field is removed, the atom comes back to its original state. The time required to do so is called relaxation time. This happens in an exponentially decay piece of time. A new term electric dipole moment rises which is the measure of separation between the positive and negative poles of the atom. The relationship between dipole moment and electric field give rise to the properties of dielectric material which is given as
$$
\boldsymbol{M}=\boldsymbol{f}(\boldsymbol{E})
$$

Dielectric properties refer to those fundamental properties that all the dielectric materials have and thus enabling them to restrict the electron flow through them, which results in polarization within the material causing poles to form when an external electric filed is applied

Following are the dielectric properties of insulation

The type of molecule present in a dielectric determines its type. There are basically two types of dielectric materials

Examples include water and hydrochloric acid.

In nonpolar dielectric materials, the center of mass of both negative and positive pole coincides and lie on the same point causing the molecule to be symmetrical in shape and thus the value of dipole moment of dielectric material become zero.

Examples are hydrogen, oxygen and nitrogen.

Some common applications of dielectrics are listed below