In this article we have discussed the design and implementation of a digital system that uses a 7- segment display to indicate the number of drug tablets in a tablet-bottling assembly line. As well as display the number of tablets in a bottle (from 0 – 9), the display can also indicate the name of the vitamin tablet being assembled (Vitamin A, b, C, d, E). This work presents the digital implementation comprising the logic expression, logic circuit and VHDL code for the Vitamin type in the bottle. A digital implementation to display the number of Vitamins in the tablet bottle as well as the Vitamin type with a BBC micro bit microcontroller is presented. The application of this work can be extended to give a visual indication of any industrial application that requires indication of the current production stage/phase.

Seven segment displays are made up of LEDs combined such that they can be used to display numbers and letters. As their name implies, they are made of seven LEDs plus an additional LED for a dot. Led dot matrix displays, on the other hand, are made up of LEDs in a square matrix form to give an indication of a letter, number or symbol. Seven segment displays can be in form of common anode or common cathode. They can also be in form of single digit or multi digit seven segment displays. Seven-segment displays are used in many types of everyday products, for example, in a tablet-bottling system, to give an indication of measurement types such as temperature or a reading on calculator or meters. The 7-segment display for the bottling system is controlled by logic circuits which encodes a decimal number in binary form consequently activating suitable LEDs of the display. 7-segment displays cannot only indicate numbers (0 to 9) they can also display some alphabets. The application of 7-segment display in this paper is to give a visual indication of the number of tablets in a drug bottling assembly line as well as give a visual indication of the Vitamin type being assembled. The digital drug tablet-bottling assembly line works by grouping and assembling a particular Vitamin tablet in a bottle along a production line after these tablets have been manufactured. In this paper, we design a digital system to indicate the alphabets (A, b, C, d, and E)which is used to categorized the kind of vitamin tablet that is assembled in a drug bottling production line. The design of numbers 0 – 9 using a single digit 7-segment display is also developed to give an indication of the number of tablets in the bottle. In this paper, the decoding logic for indicating A, b, C, d, and E letters is presented in detail.

Light Emitting Diodes (LEDs) and Liquid Crystal Displays (LCDs) are the two common types of digital visual displays. For 7-segment displays, seven light-emitting diodes are arranged in such a way as to give light whenever current flows through the powered circuit. An LCD, on the other hand, works on the principle of polarized light which gets activated when light is not reflected, thereby the letters, alphabets, numbers and characters appears black. However, inactivation causes incident reflected light to be invisible. The LED segments in 7 segments displays are organized and characterized as a, b, c, d, e, f, g and dp as indicated. When chosen LED segments are turned ON or OFF, certain alphabetical letters or numbers are created.7 segment displays normally have 8 pins which represent the each LED on the display (7 segment plus the dot making 8 LEDs) (Figure 3a and b). However, there is also a 7 segment display called a Binary Coded Display (BCD) that has only 4 pins. 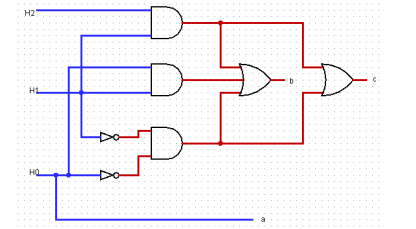 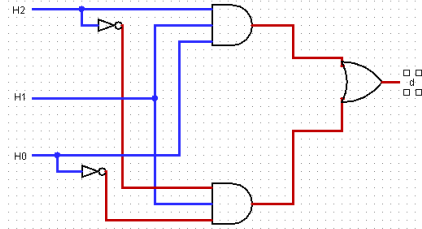 The digital indicator system with a 7-segment display was physically implemented using a BBC Micro bit microcontroller and a single digit 7-segment display to produce numbers 0 – 9 as well as letters A, b, C, d and E. These numbers and letters give a visual indication for the digital drug bottling system in an assembly process