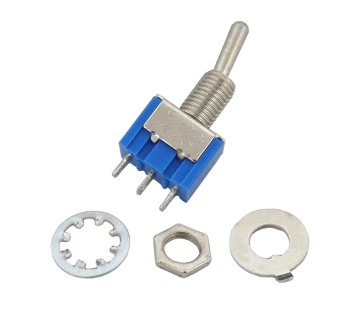 What is a Toggle Switch? The toggle switch is a type of electrical switch distinguished by the presence of a handle or lever that controls the passage of electrical power from a power supply to some type of device. An electrical toggle switch can be used in a range of business and domestic applications. This type of switch is very simple to use and can last for many years before needing to be changed.

A toggle switch has become a catch-all term for nearly any type of electrical control that manages the flow of electrical current via a handle, lever, or other type of rocking mechanism. Some switches, particularly industrial toggles, are rather large and are constructed with a metal lever with a handle in the center. For safety reasons, these industrial designs usually necessitate a great deal of effort to move from one position to another, and may be equipped with locks or timed mechanisms as part of the safety precautions. Small gadgets that can be manipulated with a finger are another form of switch of this type.

In today’s world, one of the most common forms of toggles is found in the home. The toggle light switch is a device that regulates the flow of power from the main wiring of the house to the wiring of an appliance or fixture. This type of toggle is often mounted in the wall and concealed by a simple switch cover that exposes the lever. By sliding the toggle up and down, you can turn on overhead lights or power outlets that are directly connected to the switch. A toggle switch just inside the front door controls plugs in the adjacent room in some home designs, allowing you to easily turn on lamps plugged into those outlets and flood the space with light upon entering the space.

While push buttons and virtual keypads are becoming increasingly common in households, as well as some business and professional settings, toggle switches remain the most popular choice for directing power flow from a source to a device. Because of the switch’s simplicity, the chances of it breaking down or malfunctioning are low, making it an enticing alternative. Even if the switch eventually wears out, replacing a toggle switch may generally be done in minutes and with little effort.

When selecting a toggle switch, as with any other electrical component, you must consider the features of your circuit. Toggle switches are produced from a range of materials and come in a variety of voltages, amperages, and power ratings.

Toggle switches are categorized mostly based on their functioning designs, in addition to their rating.

The amount of distinct positions into which the levers can be switched determines their classification. The most basic type is a two-position toggle switch. This is often toggled on and off.

Toggle switches in three-position designs are also frequent. This is where the user-friendliness ends.

You can order as many as you need of the 4-position, 5-position, and 6-position circuits. These many position toggle switches, on the other hand, are designed for specific uses and are therefore more difficult to locate.

The most frequent way to classify toggle switches, however, is by the number of poles and throws.

The switch’s pole is the number of independent circuits that it can control at the same time.

The number of different outputs to which each switch can connect its input is referred to as its throw.

Toggle switches are classified as SPST, SPDT, DPST, DPDT, and unusual switches that do not fit into one of the four major categories.

Precautions for the Use of the Toggle Switch

12.When utilizing the switch, corrosive gas may be created from the surrounding materials of the complete machine, which may cause difficulties such as poor contact, therefore please confirm properly in advance.

How Zener Diode Provides the Regulation?

What are the diode models?

What is the varactor diode and how does it work?

what is the difference between drift and diffusion current of a diode?