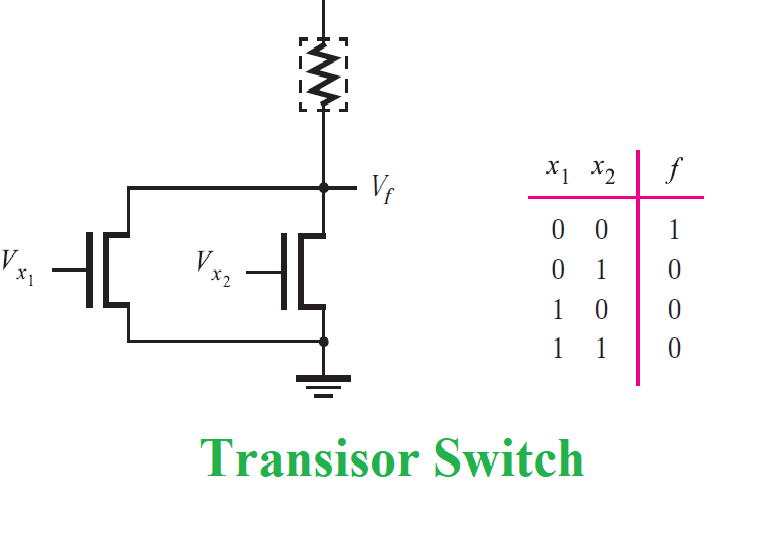 What are the Transistor Switches?  Transistors are used in logic circuits. We can presume that a transistor is used to understand how logic circuits are created. It works as a simple switch. A switch controlled by a logic signal, x, is shown in figure below. When The switch is open when x is low, and closed when x is high. The most widely used type: The metal oxide semiconductor field-effect transistor is used to build a basic switch (MOSFET). MOSFETs are divided into two categories:

NMOS and PMOS stand for N-channel and P-channel, respectively.

An NMOS transistor is depicted graphically in Figure below. The source, drain, gate, and substrate are the four electrical terminals. Ground (Gnd) is connected to the substrate (also known as body) terminal in logic circuits.

The source and drain terminals have no physical distinctions. In actuality, the voltage levels applied to the transistor distinguish them; by convention, the terminal with the lowest voltage level is considered the source.

PMOS transistors behave differently than NMOS transistors. The former are used to create the switch, in which the switch is open when the control input x is high and closed when x is low. above  figure depicts a symbol.

What are the NMOS Logic Gates?

When Vx = 0 V in the circuit in figure below the NMOS transistor is turned off. The resistor R conducts no current, and Vf = 5 V. When Vx = 5 V, on the other hand, the transistor turns on and pulls Vf to a low voltage level. The amount of current flowing between the resistor and transistor determines the exact voltage level of Vf in this situation.

Vf is usually around 0.2 V. The circuit is an NMOS implementation of a NOT gate if Vf is seen as a function of Vx. This circuit implements the function f = x in logic terms. Following Figure shows a simplified circuit schematic with an arrow labelled VDD indicating the connection to the positive power supply terminal and the Gnd symbol indicating the connection to the negative power supply terminal.

When Vx = 5 V, the resistor in the NOT gate circuit serves to limit the amount of current flowing. A transistor is usually used instead of a resistor for this reason. A dashed box is added around the resistor R in subsequent diagrams as a reminder that it is accomplished using a transistor.
The graphical symbols for a NOT gate are shown in Figure below.

The input, output, power, and ground terminals are shown on the left symbol, while the input and output terminals are only shown on the right symbol. Only the simplified sign is used in practice. The inverter is another name for the NOT gate. In this book, we use both names interchangeably.
The logic AND function is represented by a series connection of switches, whereas the OR function is represented by a parallel connection.

We can create the series connection shown in Figure below using NMOS transistors. Both transistors will be on if Vx1 = Vx2 = 5 V, and Vf will be close to 0 V. When either Vx1 or Vx2 is 0, no current flows through the series-connected transistors, and Vf is brought up to 5 V.

Above Figure  shows the truth table for f, which is given in terms of logic values. The realized function is the NOT-AND complement of the AND function, known as the NAND function. A NAND gate is implemented in the circuit. Figure 3.6c depicts its graphical symbols.
Figure below shows the parallel connection of NMOS transistors. If either Vx1 or Vx2 are both 5 V, then Vf will be close to 0 V. Vf will only be brought up to 5 V if both Vx1 and Vx2 are 0.

Figure below shows a related truth table. It demonstrates that the circuit achieves the NOR function, which is the complement of the OR function.
The reader would naturally be interested in the AND and OR gates that were used extensively in the previous chapter, in addition to the NAND and NOR gates just discussed.
In NMOS technology, an AND gate is formed by following a NAND gate with an inverter, as shown in Figure below. The NAND of inputs x1 and x2 is realized by Node A, and the AND function is represented by f. An OR gate is also implemented as a NOR gate followed by an inverter.