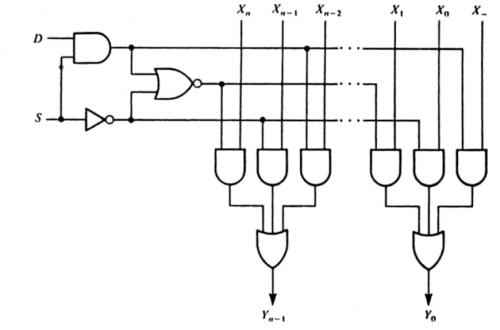 Shift-and-add multiplication method adds the multiplicand X to itself Y times, where Y is the multiplier. What are the Shift and Add Multiplier Circuits?

How shifts are multiplied?

For multiplication of a number, a binary shift moves all the digits in the binary number along to the left and by filling the gaps after the shift with 0

For multiplying by two, all digits shift one place to the left.

A multiplier is an electronic circuit that is used to multiply two binary numbers. Assembled utilizing parallel adders that are full adders.. It’s used to eliminate the least significant bits of the product.

What is multiplier and accumulator?

In computing, the multiply–accumulate (MAC) or multiply-add (MAD) operation is a common step that computes the product of two numbers and adds that product to an accumulator.

A circuit in which two unsigned n-bit binary numbers are multiplied. The circuit contains a two-dimensional array of similar sub circuits in which each one contains a full-adder and an AND gate.

If large values of n are present, this procedure is not considerable as the large number of gates would be needed. To use different approach, we use a shift register with an adder in implementation of classical method of multiplication.

The manual process of multiplying two binary numbers is done by the product that is formed by a series of addition operations done. For every bit “i” in the multiplier considered is 1, the value of the multiplicand shifted to the left “i” times is added to the product.

An ASM chart is presented in which the assumption is that an input “s” is used when the machine initializes the multiplication process.

The longest “s” is 0, the machine remains in the state S1 and from external inputs, the data for A and B can be loaded.

In state S2 we observe the value of the least significant bit of B, and if it is 1, we’ll add A to P. Otherwise, P will not be changed.

For every clock cycle when machine is in state S2, we’ll shift the value in A to the left according to the pseudo-code. The contents of B are shifted to the right because in each clock cycle b=0 can be used in deciding whether A should be added to P or not.

To implement A, a right-to-left shift register is used that has 2n bits. A 2n-bit register is required for P, and it should include an enable input because the assignment P ← P + A in state S2 is inside a conditional output box. A 2n-bit adder is required to produce P + A.

Considered that P is loaded with 0 in state S1, and P is loaded from the output of the adder in state S2. One can’t assume that the reset input is used to clear P, because the machine changes from state S3 back to S1 based on the s input, not the reset input. Hence a 2-to-1 multiplexer is needed for each input to P, to select either zero or the appropriate sum bit from the adder. An n-bit left-to-right shift register is needed for B, and an n-input NOR gate can be used to observe whether B = 0.

An ASM chart requires control signals for the multiplier. In state S1, Psel will be set to 0 and EP is affirmed, so that register P is cleared. When s = 0, parallel data can be loaded into shift registers A and B by an external circuit that will controls their parallel load inputs LA and LB.

In the control circuit, processes labelled FSM transitions and FSM outputs define the state transitions and generated outputs, respectively. The parallel data input on the shift register A is 2N bits wide, but Data A is only N bits wide.

The signal N Zeros is used to generate n zero bits, and the signal A in prepends these bits with Data A for loading into the shift register. A FOR GENERATE statement is required in which the multiplexer needed for register P is defined using that instantiates 2N 2-to-1 multiplexers.

A simulation resulted for the circuit is generated from the code. After the circuit is reset, LA and LB are set to 1, and the numbers to be multiplied are placed in the Data A and Data B inputs. After s is set to 1, the FSM will be converted to state S2, where it remains until B = 0. For each clock cycle in state S2, A is moved to the left, and B is moved to the right. In three of the clock cycles in state S2, the contents of A are added to P, corresponding to the three bits in B that have the value 1.

When B = 0, the FSM changes to state S3 and P contains the correct product, which is

The decimal equivalent of this is 100 × 25 = 2500. The number of clock cycles required for the circuit is generated by the final product which is determined by the left-most digit in B that is 1. It is possible to decrease the number of clock cycles required by using more intricate shift registers for A and B. If the two right-most bits in B are both zero, then both A and B could be shifted by two bit positions in one clock cycle. Similarly, if the three lowest digits in B are 0, then a three bit-position shift can be done, and it will continue. A barrel shifter is used in shift register for shifting multiple bit positions at once.