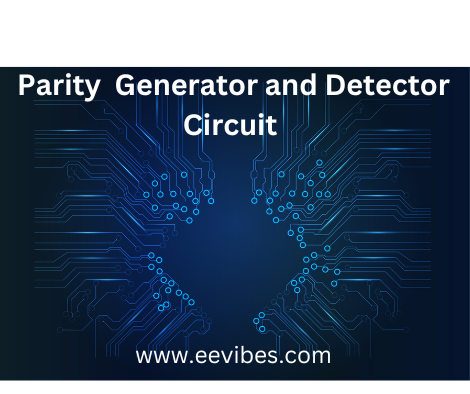 How to Design an Even Parity or an Odd Parity Generator and Detector Circuit? A parity bit is used for error detection and correction in the communication and digital systems. So parity bit plays an important role while transmitting or receiving the binary information.

Example of Even Parity Generator Circuit

Consider we want to transmit a 3-bit message (xyz) that will be transmitted using even parity concept. The truth table for even parity generator is shown below:

Also you can determine its expression from the Karnaugh map as shown below:

The circuit diagram for parity generator is shown in the figure below:

For the even parity detector, we need to have three inputs (x,y,z) along with the parity bit so that it could be deiced easily either there is some error or not. Since the information is transmitted with even parity so there must be even number of 1’s in the received message.

An error is occurred in the transmitted message if the received message has odd number of 1’s in it. This will indicate that one of the bits has changed its value.

Now, lets derive an expression for even parity detector circuit. The resulting function that models this behavior is named as  error function. Its values are listed in the following table.

If you look at the behavior of error function, it can be noticed that it produces output equal to 1 when there are odd number of 1’s are present at the input side including the parity bit. Hence again it is the XOR function behavior.

As both even parity generator and detector circuits are implemented using XOR gates. So one interesting point is that we can use the same circuit at the transmitter and  receiving side with the P bit grounded at the transmitting side.

How to design an Odd parity Generator and Detector Circuit?

If you closely look at the parity function then it can be observed that the parity function is having value equal to 1 when there are even number of 1’s at the input side and its value is 0 when there are odd number of 1’s at the input side. This is actually the property of XNOR gate. So odd parity generator circuit can be implemented using 3-input XNOR gate.

Video Lecture for even and odd parity generator and detector circuit.

The first step of designing this combinational circuit involves the construction of truth table for the input variables a, b, c, d and output variables w, x, y, z.

For learning how to take the 2’s complement of a function watch this lecture:

The truth table for this problem is constructed below as:

The next step is to treat each output variable as an output function and derive its expression as a combination of a,b,c,d using k-map.

We can Write the output functions as:

using the same approach, you can extend the idea to 5-input variables whose 2’s complement is desired.