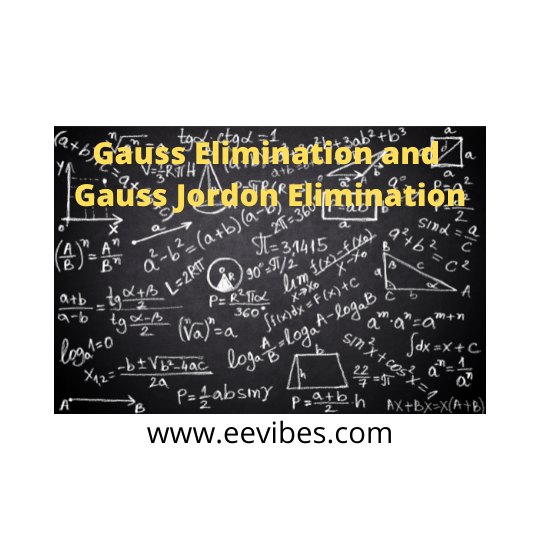 Gauss Elimination Vs Gauss Jordan Elimination Methods for Solving System of Linear Equations. In this article we examine the comparisons between the Gauss and Gauss-Jordon methods for fixing system of linear equations. It was very unusual by solving the linear system of equation by using both methods Gauss-Jordon and Gauss elimination method and both can gave the same answers. This necessarily implies that, since the same system of linear equations is change leading to its matrix form to be convert the rows’ element clearly interchange, the final solutions are still the identical. The paper also express that the Gauss elimination and Gauss-Jordan elimination methods be tested on the given different systems of linear equations appear in different areas of study like Physics, Business, Economics, Chemistry, etc.

What is the Gauss Elimination Method?

In linear algebra, Gaussian elimination is a method for computing system of linear equations finding the rank of a matrix and calculating the inverse of an invertible square matrix. . Friedrich Gauss, a great 19th century mathematician suggested   this elimination method as a part of his proof of a particular theorem.

The process of Gaussian elimination has two parts:

Step one is (forward elimination) decrease a given system of linear equation to either echelon form in a deteriorate having a no solution indicating the system has no solution. That is conclude by the use of elementary row operations.

One more tip to aspect which turns out and can be very useful to study the algorithm is that Gaussian elimination computes matrix decomposition. Every matrix has a reduced row echelon and Gauss –Jordan elimination is guaranteed to find it. Elementary row operation used   in   the   Gaussian    elimination (multiplying rows, switching rows and adding multiples of rows to (other rows) amount to multiplying the original matrix with invertible matrix from the left. First one we calculated the LU decomposition (decomposition in both lower and upper triangular form), and then we writes the consequence of uniquely computing invertible matrix the actual matrix and a uniquely calculating reduced row echelon matrix.

The Gauss –Jordan method is a altered of the Gaussian elimination method. It is named after Carl Friedrich Gauss and Wilhelm Jordan because , Gauss –Jordan elimination method goes a step further by placing zeroes above and below each pivot. Every matrix has a reduced row echelon form and Gauss –Jordan elimination is guaranteed to find it. The paper aims is comparison the methods how to solving the linear system of equations by using Gauss Elimination and Gauss- Jordon method , contrast the two techniques to finding out the application of these methods to other fields study. Of 2 x 2, 3 x 3, 4 x 4 and 5 x 5 matrices. It contains the first published results on determinant proving Crammer’s rule for 2 x 2 and 3 x 3 systems and specify how 5 x 5 invalid work. Crammer gave the general rule for n x n systems in a paper introduction to the analysis of algebraic curves (1750). It a roe out of a desire to find the equation of a plane curve passing through a number of given points.

It is not surprising that the beginning of matrices and determinants should arise through the study of linear systems of equations and some of these are preserve in clay tablet that survive. The Chinese between 200BC and 100BC c. the Chinese methods describe above were constructed Indeed, it is fair to say that the text nine chapters on the Mathematics Art written during the Han Dynasty give the first known example of matrix methods.

Cardan, in Art Magna (1545), gives a rule for solving a system of two linear equations, which he called regular and which is called the mother of rules. This rule gives that essentially is crammer’s rule for solving a 2x 2 system. The method of finding the determinant is take in Japan and Europe at almost exactly same time although Seki in Japan certainly published first. In 1683,Seki wrote method of solving the dissimulated problem that contains matrix methods written as tables in exactly the Chinese methods describe above were constructed. Without having any word that corresponds to „determinant‟, Seki still introduced determinants and gave common techniques for calculating them based on examples. Using his determinant ‟Seki was able to find determinants of 2 x , 3 x 3, 4 x 4 and 5 x 5 matrices and applied them to solve equations but not system of linear equation.

In the 1730‟s, Maclaurin Treatise of Algebra although it was not published until 1748, two years after his death. It contains the first published result on determinant proving Crammer’s rule for 2 x 2 and 3 x 3 systems and how the 4 x 4 case would work. Crammer gave the general rule for n x n, systems in a paper introduction to the analysis of algebraic curves (1750). It out of a desire to find the equation of a plane curve passing through a number of given points.

In 1764, Bezout gave methods of calculating determinants, as did Vandermonde in 1771. In 1772, Laplace claimed that the method introduced by Crammer and Bezout were impractical and he conscious about the sphere of the inner planets, he discussed the solution of system of linear equation without actually calculating it by using determinants. Rather surprising Laplace used the word resultant‟ for what we now call the determinant. Surprisingly since Leibniz use the

similar word that words used the Laplace. But Leibniz was oblivious the Laplace work Laplace gave the expansion of a determinant that is now named after him.

The first to use term „matrix‟ was Sylvester in 1850. Sylvester defined a matrix to be an oblong arrangement of terms and saw it as something that led to various determinants from square arrays contained within it. After living America and returning to England in 1851, Sylvester and Cayley, both are the best friends and take much interest in mathematics. Cayley quickly saw the significance of matrix concept and by 1853 Cayley had published a note giving for the first time, the inverse of matrix.

You can also check how to Solve System of Linear Equations

How to solve system of linear equations in Linear Algebra?

To find the inverse of any invertible matrix or solving the system of linear equation we used the gauss-Jordon elimination method. It depends on three elementary row operations any one of these operations using on a matrix. Exchange the positions of two of the rows. Multiply any of the rows by a nonzero scalar.

Application in Economics of Gauss Elimination and Gauss Jordan Elimination

Gauss and Gauss-Jordan methods can be used to find the equilibrium price and quantity to be supplied in a given market. Let say there are two products: orange and water which are interrelated. Let P1 and q1represents the price and quantity demanded respectively for product 1 (orange juice) and P1 and q2 for product 2 (water).

Another important application of Gaussian elimination and Gauss-Jordon is Robust Fingerprint Image Enhancement. Gaussian sieve use to intensify the image. The SGE techniques is also suitable for calculating the linear equations on mesh-connected processors. The Gaussian method is also used for organize the design.

The study has concluded that when performing calculation by hand, Gauss-Jordan method is more preferable to Gaussian elimination version because avoids the need for back substitution. Besides, it was noted very remarkably that both Gauss elimination method and Gauss-Jordan elimination method gave the same answers for each worked example and both with pivoting and partial pivoting equally gave the same answers. This necessarily implies that since the system of linear equations still remains the same despite that the equations are re-arranged leading to its matrix form to be transformed as the rows‟ elements obviously changed, the resultant solutions are still the same. The importance of Gauss and Gauss-elimination method cannot be over emphasized due to its relevance to Physics, Biology, Chemistry, Mathematics etc. social science i.e. Economics, Geography, Business Education etc.).

Other Topics of Linear Algebra